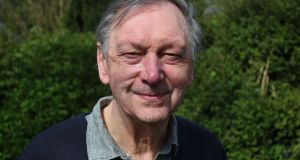 DG Boyce: his modest manner belied both his influence and a remarkable breadth and depth of historical, as well as literary, knowledge and insight. Photograph: Niall Boyce

David George Boyce, who has died at the age of 77, was a leading historian of Anglo-Irish relations. His career was based almost entirely in Wales but he retained close links with Ireland.

He was born in Lurgan, Co Armagh, in 1942, the third of four children of Isaac Boyce, a long-term soldier and Dunkirk veteran, and his wife, Jane Anna Courtney, a linen worker. He was educated at Carrick Primary School and later Lurgan College.

He was influenced by two inspirational teachers: history teacher William Crawford, later a celebrated archivist and pioneer of local history, and the artist Cecil Maguire, then an English teacher, both of whom cultivated his passion for reading at the local Carnegie library.

George became the first member of his family to attend university, studying history at Queen’s University, Belfast. While at Queen’s he met his future wife, Kathleen, another history student.

Following postgraduate research, he was employed as an archivist in the Department of Western Manuscripts of the Bodleian Library, Oxford.

In 1971 he was appointed as a lecturer in political theory and government in Swansea University, Wales, where he was awarded a personal chair in 1989. He retired in 2004 but continued to research and publish. He died on August 17th.

George’s first major work, Englishmen and Irish Troubles: British Public Opinion and the Making of Irish Policy 1918-22 (1971), was based on his PhD thesis supervised by Prof JC Beckett at Queen’s.

This innovative study examined the influence of the British public on political policy towards Ireland in the revolutionary period.

He was to revisit this topic a quarter of a century later in a transformed political context with The Irish Question and British Politics 1868-1996 (1996).

His natural curiosity drove him to examine the Irish question from other perspectives. Nationalism in Ireland (1982) was a magisterial volume that provided for the first time an analytical treatment of the political ideology of Irish nationalism from its origins to the modern day. Other monographs include Nineteenth-Century Ireland: the Search for Stability (1990) and Ireland 1828-1923: From Ascendancy to Democracy (1992).

In the mid-1990s, George turned to editing works on 19th- and 20th-century Ireland with his friend Alan O’Day, collecting insights from established scholars and encouraging new voices in Irish political history. Among these six impressive collections are The making of Modern Irish History: Revisionism and the Revisionist Controversy (1996), and The Ulster Crisis: 1885-1921(2005). He also wrote on military and imperial history.

Although George was to remain in Wales for the rest of his life, he continued to feel a close affinity for, and a deep sense of duty towards, his homeland. For many years, he examined at all levels for the constituent colleges of the National University of Ireland and other higher-education institutions throughout the country.

George’s modest manner belied both his influence and a remarkable breadth and depth of historical, as well as literary, knowledge and insight. Although frequently consulted by senior figures in Irish history, he was also noted for the support and encouragement he gave to a broad and diverse field of younger scholars, in whose work his intellectual legacy will endure.

Nearly every year he returned to visit Northern Ireland, often holidaying with his family on the Ards Peninsula.

He is survived by his wife Kathleen, daughter Maria, son Niall, and grandchildren. His funeral service took place in Swansea but his ashes will be interred later in 2021 in a churchyard in Co Down.