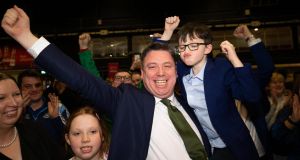 Perceptions of time have changed for many in the past year due to the impact the Covid-19 pandemic has had on so much of life in Ireland.

It might not seem like it, but the general election took place some 11 months ago and the protracted coalition talks that yielded the Fianna Fáil-Fine Gael-Green Party Government concluded more than six months back.

For the more than 40 TDs who were elected to the Dáil for the first time in February, the settling-in process has been highly unusual.

Three first-time deputies tell The Irish Times about their experiences to date.

The Fianna Fáil deputy came close to taking a seat in 2016, narrowly losing out to Fine Gael’s Noel Rock. However, the former lord mayor of Dublin managed to turn the tables last time around, but believes he was elected in what became “one of the strangest years to enter the Oireachtas”.

“Between the Government formation and the Covid restrictions, the opportunity to actually be a parliamentarian or be a member of the Dáil was much more limited,” he says. “That was really strange in a sense.”

The pandemic and the long process of forming a coalition limited opportunities to debate with ministers and put down parliamentary questions, but did not halt one of the less desirable aspects of the job.

“Some of those incidents were self-inflicted wounds with mistakes the Government made, things they didn’t communicate well, but I was surprised at how they were used by some Opposition parties to inflict maximum political impact on you and that was new for me.”

He hopes 2021 will eventually see the workings of the Oireachtas revert back to the norm and he is keen to get to work on issues such as reforming laws on the use of scrambler motorbikes in parks, on streets and elsewhere in his area.

“While that might not be a national issue, it’s really core in my constituency because it undermines the actual relationship between the community and the gardaí,” he says. “They’re often used to courier drugs, they have a massive impact on sports clubs and football pitches in the area. . . It’s one of the things I’m sort of shepherding.”

The former councillor and senator likened her first few months as a TD to “working in a blizzard”.

The first Sinn Féin candidate to win a seat in the Mayo constituency since 1927, she was elected on the first count with more than 14,600 votes and believes that having a few years in the Seanad under her belt was a “huge advantage” to adjusting to the new job.

“I suppose that prepared me in terms of working in the Oireachtas,” she says. “The unusual thing that we could have never accounted for was Covid and honestly there were times, particularly in the first few months, where I felt like I was working in a blizzard.

“There were so many Covid-related concerns and queries and issues that needed to be dealt with. It has been a strange time and a challenging time for everyone.”

Conway-Walsh says the Dáil has proven to be a “more adversarial” place than the Seanad.

“In the Seanad there tended to be a collegiate approach to many of the issues. I would say that the quality of discussion and debate in the Seanad was probably better on the whole, or at least it was in my time, than some of the contributions you hear in the Dáil.”

Conway-Walsh says that once she started canvassing ahead of the election she could sense that “the feeling for change was palpable” and people “were willing to change their voting patterns to make it happen”.

“Mayo would traditionally be a Fianna Fáil-Fine Gael county, kind of very much Civil War politics,” she says. “It was a very satisfying experience in that people were, really as a collective, no longer afraid of change and they were taking back control [in a way] that I had never seen in Mayo.”

The Fine Gael deputy says the biggest challenge she found after her election was “actually learning how to be a TD”.

She had worked as a barrister, an academic and a ministerial policy adviser and was elected to Dún Laoghaire-Rathdown County Council in 2019, less than a year before taking the last seat in her constituency in February’s general election.

“I’ve had to learn how to be a TD,” she says. “That might sound very silly or simple but I’ve had to learn to do basic things for my constituents, follow up with different queries, get results, helping my staff learn how to do things. . . that’s just a learning process that I have gone through an awful lot this year.”

Carroll MacNeill joined Fine Gael as legal adviser to then-party leader Enda Kenny in 2008 and went on to become a policy adviser to ministers Frances Fitzgerald, Alan Shatter and Eoghan Murphy. This meant she knew her way around Leinster House.

“I worked here for a long time, so I would have known the parliamentary process but it is different to be a direct participant than somebody who is working to support other people,” she says.

“It’s different being out in the front rather than being in the background. . . Having spent the time this year learning how to become a TD and having got some of that under my belt, I’m really looking forward to the next year because I feel like I can get my teeth into a lot more policy work which is what I’ve always wanted to do.”