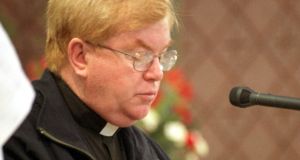 Fr Brian O’Toole, of the Spiritan order of Catholic priests, has died aged 70.

Fr Brian O’Toole, of the Spiritan order of Catholic priests, who has died aged 70, was one of a now fast-diminishing number of Irish missionaries who, very numerous in the three decades after the Second World War, spread their faith, and much more in terms of basic human development, from this country to the farthest corners of the developing world.

His own remarkable journey took him from a modest working-class background in Rialto, Dublin, where his father, Patrick, was a corporal in the Army stationed in Dublin, to the remote Jinka region of Ethiopia where he worked for 18 years, learning the Amharic and Hamar languages to a level of fluency which enabled him, with others, to compile the first ever English-Amharic-Hamar dictionary, and where he became the first-ever Catholic priest to co-operate with a priest from the Ethiopian Orthodox Church in a joint mission in the Hamar region of Dimeka, where he became known, in the language of the Hamars, as “Delambi,” i.e “the father who stayed.”

When, in 1983 O’Toole arrived by foot in the settlement of Dimeka from the zonal capital, Jinka, there was no road. Working with local communities, he oversaw the manual construction of its first road, a dirt track, connecting villages. Subsequently paved, that road is now named in his honour as Father Brian O’Toole Road.

After his work on the Hamar-Amharic-English dictionary, agreement was given to the idea of establishing a public library, also now called after him, to further expand the work he had begun in education.

Before his long African journey began, O’Toole had made what many would say was another remarkable journey in his native Dublin, from Rialto to the much more privileged surroundings of Blackrock College, at the age of 16, where he completed his Leaving Certificate prior to joining the then Holy Ghost order at Kilshane Novitiate, which was followed by three years of theological and philosophical training at the order’s Kimmage Manor college, near to his family’s home in south-west Dublin.

It was not, at first, a likely journey, and one which came about, after early teenage years at St James’CBS, and, earlier still, at national school in Basin Lane in the south inner city. Clearly very bright, he left school aged just 14, having successfully taken the famous Guinness examination for junior clerkships in the brewery, then considered a highly-prized route to a job for life, and went to work there.

Stories circulated that when other boys were out playing football, Brian preferred to exercise a theatrical talent for 'saying' Mass at a small table at home, pretending to be a priest.

A Holy Ghost priest, probably on a mission in O’Toole’s home parish, however, noticed his religious devotion when stories circulated that when other boys were out playing football, Brian preferred to exercise a theatrical talent for “saying” Mass at a small table at home, pretending to be a priest. Other factors were probably involved, for young O’Toole demonstrated a strong talent for languages. The visiting Holy Ghost father arranged for him to be accepted as a boarder at Blackrock, where he must surely have stood out among the sons of prosperous large farmers and business people, prominent lawyers and eminent medical consultants.

If it was an investment in the future of the order, it paid dividends. After Kimmage, O’Toole took an Honours BA in Arts at UCD, followed by an H.Dip. in Education, and then completed a post-graduate degree of Bachelor of Divinity (BD), at St Patrick’s College, Maynooth, and, after ordination in 1978, went on to study Christology from an Orthodox perspective at Fordham University, New York.

Arriving in Ethiopia in the midst of a humanitarian crisis in 1980, he worked initially in the Kemba region with three nuns of the Medical Missionaries of Mary (MMM), where, apart from relief work, he used what spare time he had to study Amharic. In 1983 he began his historic work with the Ethiopian Orthodox Church in Dimeka, at the time the only initiative of its kind in the world and innovative even in the famously ecumenical field of missionary work, where circumstances often force Christian clergy of differing faiths into an ad-hoc level of co-operation which would have been, at that time, virtually unheard of in his native Ireland.

Over the next 12 years in Dimeka, Fr O’Toole succeeded in building three churches - effectively community development units with chapels attached, very far in scale and splendour from the basilicas of his native Dublin - and a parish kindergarten, bilingual in Amharic and Hamar, itself innovative for the region in a country where regional diversity is so often a source of insecurity and even conflict.

In 1995, O’Toole became co-ordinator of an Integrated Development Programme for a wide area including Jinka, the regional capital, and other centres such as Gamo Gofa and Arba Minch, and from that year also served a three year term as Superior of the Spiritan order in Ethiopia.

Returning to Ireland in 1999, he worked as a librarian at the Kimmage Mission Institute, now a major centre of development studies with students from many parts of the world, and then served as Secretary of the Irish Spiritan Province for six years.

Later, O’Toole worked as Director of the Irish Missionary Union’s Justice Desk, dealing with issues of peace and the environment, and was Irish representative of the Africa and Europe Faith and Justice Network.

O’Toole also found time to be a tutor in Religion and Ecology at All Hallows College, and a chaplain to Teams of Our Lady, a Christian movement for married couples, while he was also involved, very appropriately given his African experience, in inter-faith and ecumenical work.

Fr O’Toole’s mother, Margaret (nee Goulding), originally from Sandymount in Dublin, lived to be 98 years old, predeceasing her priestly son only in 2018. He is survived by his sisters Marjorie, Muriel and Joan, and by his brother, Sean.