Kushner and Trump’s security detail forced to use rented basement for $3,000 a month 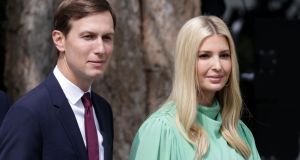 According to the Washington Post Ivanka Trump and Jared Kushner have banned their security detail from using the toilets in their sprawling Washington DC mansion. Photograph: Alex Wong/Getty Images

The dying days of the Trump administration have been plagued by yet more scandal in the form of riots, Twitter bans and impeachment. Now the Washington Post has added another: water closet gate.

In a multi-bylined article one of America’s top investigative news outlets has chronicled in leg-crossing detail the apparently extreme difficulty that the Secret Service detail assigned to Ivanka Trump and Jared Kushner have had in finding a place to go to the bathroom.

According to the Washington Post the president’s daughter and her top White House adviser spouse have apparently exiled the squad of men and women assigned to keep them from harm’s way from using the toilets in their sprawling Washington DC mansion.

“Instructed not to use any of the half-dozen bathrooms inside the couple’s house, the Secret Service detail assigned to President Trump’s daughter and son-in-law spent months searching for a reliable restroom to use on the job,” the paper reported, citing neighbours and law enforcement official.

It quoted one law enforcement official as saying: “It’s the first time I ever heard of a Secret Service detail having to go to these extremes to find a bathroom.”

It added that Secret Service members in the couple’s detail who were desperate to relieve themselves had resorted to a porta-potty, as well as bathrooms at the homes of Barack Obama and vice-president Mike Pence.

The solution to the problem was not a cheap one. Since September 2017, the paper reported, the federal government rented the stricken Secret Service members a basement studio with a bathroom for the purposes of them going to the loo. The cost to taxpayers? Some $3,000 (€2,470) a month.

A White House spokesperson denied the couple restricted agents from their home. But the Post stuck by its investigative guns, saying: “That account is disputed by a law enforcement official familiar with the situation, who said the agents were kept out at the family’s request.”

The Post’s story is unlikely to endear Washington citizens – or indeed many other Americans – to Ivanka Trump and her husband as they leave office after four high-profile years in Donald Trump’s administration. Multiple reports have already gleefully detailed the couple’s likely rejection from the New York and Washington DC social circles in which they have previously moved.

Not that the couple will lack for a place to call home. They have recently bought a $30 million plot of land on an exclusive island in Florida nicknamed the Billionaire’s Bunker. – Guardian