Hilary Fannin: My generally optimistic friend has begun to fade over the past few months 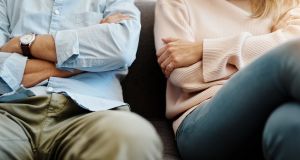 ‘There’ll be so many women like me out there with their lives in a suitcase, I’ll never meet anyone else’. Photograph: iStock

Well, here we are, mid-January, the storm is still raging and, for many of us, our stirring New Year resolutions are withering on the vine of an uncertain future.

I’m coaxing myself out of the scratcher and on to my bright purple yoga mat in the mornings with the promise that, come Friday night, my goody-two-shoes glass of lukewarm lemon-infused tap water will magically transform itself into a hefty gin.

Generally, I must admit, this wish tends to come true on Thursday instead, at the latest. Like a shaky old nag facing the triple jump, I falter, crash into my own resolution and have a drink. So be it.

I read somewhere that just three consecutive days without alcohol is the equivalent of sending your liver to an ashram and giving it a gong bath, which is more than I’ve ever done for the rest of me.

Speaking of baths (sorry, were we?), I was lying in a slightly grubby one the other morning reading a bottle of bubble bath that I’d gratefully received as a Christmas gift. Living as I do in an entirely male household (bar the cat, who licks herself clean and then hoiks up a couple of furballs on the aforementioned yoga mat), there’s rarely any girlie products to examine in the bathroom, while lurking in the cooling water to avoid a deadline.

But who knew what I’d been missing, eh? “Plucked from the naranja grove, lively citrus airs dance the flamenco at dawn, azure blue skies overhead.”

Well, well, the shower gel had obviously been leading a significantly more interesting life than I could lay claim to. I flung the bottle at the tap, stood up, dripped across the mat, unearthed some fetching leisurewear and finally faced the news of the day.

Let me reassure those of you who still have your heads determinedly planted in your Christmas stocking, who are unwilling to face another lockdown dawn and the relentlessly bleak dispatches that come with it – you’re really not missing much.

Having exhausted my interest in the sayings of Styles, I was considering getting back into the bath, when I received a call from a friend of mine

Sorry, I’ll just rewind there a minute. Why, yes, I did just mention One Direction’s charming and tousle-headed Harry Styles in the same breath as a medic-political mayhem.

Apparently Styles has long enjoyed dating mature women; you know, women who arrived on the planet before the advent of the Teletubbies. When asked, as a teenager, “How old is too old when it comes to dating women?”, Styles replied: “Any woman older than my mum, Anne.” He then added that Anne was 43.

That this limp story has re-entered the the public conversation is mildly depressing – honestly, who gives a flying furball? Presumably, however, it gained some small traction because it’s marginally less depressing than just about everything else that’s going on in the firmament.

Anyway, having exhausted my interest in the sayings of Styles, I was considering getting back into the bath, when I received a call from a friend of mine.

A generally sunny, optimistic kind of character, she has, over the past few months, begun to fade and tarnish, like a sports-day trophy from a long-forgotten sack race.

The problem, I think, is with her husband, for whom her patience is wearing thin. He is one of those men who are never wrong about anything: the efficacy of hybrid as opposed to electric, the correct way to floss, the optimal length of an extension lead or a hot flush.

Currently working from home, he has, she explained, taken to standing in the middle of the kitchen and, like the speaking clock, ceremoniously announcing the daily Covid figures, country by country.

I got back in the bath. It’s the nearest thing I’ll be getting to a holiday this year

His undoubtedly well-intentioned pronouncements, delivered with the metronomic regularity of a self-righteous and gloomy hand-carved cuckoo, are driving her over the edge.

“I was thinking about leaving him, you know, as soon as I can get beyond the 5k limit, but then what am I going to do?” she said. “There’ll be so many women like me out there with their lives in a suitcase, I’ll never meet anyone else.”

“Older than Harry Styles’s mother then? Yep, your options are certainly narrowing.”

The other bubble bath in the gift set promised “an evergreen eucalyptus forest, a waterfall thundering over sheer rock and the blue haze of oils rising from the leafy undergrowth”.

I got back in the bath. It’s the nearest thing I’ll be getting to a holiday this year.