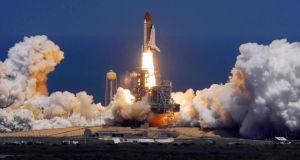 A Cork-based solicitor who drew a direct line between Roman charioteers and the US space shuttle programme has seen his historical musings go viral.

At the time of writing Bill Holohan’s Twitter thread had attracted more than 50,000 retweets, and in excess of 124,000 likes and thousands of comments, from people including comedian Stephen Fry and actor Ryan Reynolds.

It all started innocently while Holohan was travelling home from Dublin on the evening train last Friday .

“What’s the big deal about railroad tracks? The US standard railroad gauge (distance between the rails) is 4 feet, 8.5 inches. That’s an exceedingly odd number. Why was that gauge used?”

Holohan then proceeded to answer his own question.

“Well, because that’s the way they built them in England, and English engineers designed the first US railroads.”

Holohan explained that it was because the first rail lines were built by the “same people who built the wagon tramways and that’s the gauge they used”.

That begs another obvious question. Why did they use that gauge?

“Because the people who built the tramways used the same jigs and tools that they had used for building wagons, which used that same wheel spacing.”

And why did the wagons have that spacing?

“Well, if they tried to use any other spacing, the wagon wheels would break more often on some of the old, long distance roads in England,” Holohan said.

A history lesson for people who think that history doesn't matter:
What's the big deal about railroad tracks?
The US standard railroad gauge (distance between the rails) is 4 feet, 8.5 inches. That's an exceedingly odd number.
Why was that gauge used?
Well, because that's the way pic.twitter.com/oNxWuJ4TAl

And who built those old rutted roads? “Imperial Rome built the first long distance roads in Europe (including England ) for their legions. “

The solicitor went on to say that Roman war chariots formed the initial ruts, “which everyone else had to match or run the risk of destroying their wagon wheels. Since the chariots were made for Imperial Rome , they were all alike in the matter of wheel spacing.”

So Holohon says the United States standard railroad gauge of 4 feet, 8.5 inches “is derived from the original specifications for an Imperial Roman war chariot. Bureaucracies live forever. So the next time you are handed a specification/procedure/process and wonder ‘What horse’s ass came up with this?’, you may be exactly right. Imperial Roman army chariots were made just wide enough to accommodate the rear ends of two war horses. (Two horses’ asses.)”

His story did not end there and came with an added twist.

“When you see a space shuttle sitting on its launch pad, there are two big booster rockets attached to the sides of the main fuel tank. These are solid rocket boosters, or SRBs. The SRBs are made by Thiokol at their factory in Utah . The engineers who designed the SRBs would have preferred to make them a bit fatter, but they had to be shipped by train from the factory to the launch site. The railroad line from the factory happens to run through a tunnel in the mountains, and the SRBs had to fit through that tunnel. The tunnel is slightly wider than the railroad track, and the railroad track, as you now know, is about as wide as two horses’ behinds.”

Therefore he concludes that a major design feature “of what is arguably the world’s most advanced transportation system, was determined over two thousand years ago by the width of a horse’s ass. And you thought being a horse’s ass wasn’t important?”

He concluded his thread by saying “ancient horse’s asses control almost everything and CURRENT horses asses are controlling everything else.”

Holohan has transport connections in addition to his weekly commute on the Cork-Dublin line. “My father before he retired in 1985 was manager of Cork Airport and his father before him was the Ticket Master at Kent Station in Cork,” he told The Irish Times.

He said he was taken completely by surprise by the speed at which the tweet took off. “I put it on Facebook two years ago and no-one played a blind bit of attention to it then,” he said. “But last Friday night it was different and maybe it was because people were bored on their couches and eating pizza and watching television which really helped it.”

He said, with a wry laugh, that he likes to post historical tweets because “I am a 59-year-old solicitor so who cares what I have to say?”

According to the apocryphal tale debunking website snopes.com, the story as told by Holohan is at least partially true but perhaps not entirely accurate.

It points out that while the current width of train tracks does indeed match chariots and may well have a direct link, it was not an inevitable one.

There were, in fact, multiple rail gauges used in different parts of the US in the 19th century with confederate states using completely different train tacks to northern states. So had the US Civil War “taken a different course, the eventual standard railroad gauge used throughout North America might well have been different than the current one”.

The website also points out that while the engineers building the rocket boosters for the space shuttle did have to keep shipping considerations in mind and equipment did travel by train, there is no evidence they had to alter their designs “because any particular tunnel that lay between their plant and the Florida launch site wasn’t large enough”.

O’Holohan accepted that it was hard to say if the thread was 100 per cent accurate as so much of the detail had been lost in the mists of time but said “the chariot track lines left in Pompeii are the same measurements as train gauges”.

Among the sources he used were Nasa, leading archaeology websites and – of course – Wikipedia.

As to the responses, initially he had no idea why his phone was hopping. “I had to switch off my phone on Friday night just going being bing bing bing bing with all the alerts. I’ve never seen anything like it.”

He said when Stephen Fry tweeted about it he was taken to task for not challenging every detail in the thread.

And what did Fry say about it?

He said: “Threads don’t get any more glorious than this.”