How an Irish hurling fan out-scammed a scammer 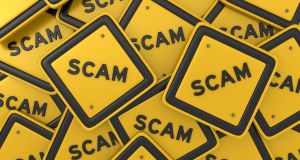 Ross Walsh was contacted by a Solomon Gundi, who was not as wise as his name might suggest. Photograph: iStock

A 22-year-old Limerick student has achieved an unprecedented grand slam of scam-baiting by simultaneously wasting a con artists time and making them look stupid while also getting them to part with their own cash. . . and forcing them to communicate in language normally heard on a hurling pitch.

The stellar achievement belongs to Ross Walsh who was contacted by a man who identified himself as Solomon Gundi.

Solomon was not as wise as his name might suggest and nor did he display a particular strong command of the English language in the unsolicited mail he sent Walsh.

He was however – or at least claimed to be – a businessman of some note.

“Pleased to be with you,” Solomon’s first mail started.

And what was Solomon’s business? It had to do with trading stocks.

As luck would have it Walsh was on his computer when the mail arrived and was able to respond immediately.

“Delighted to receive your intriguing business proposal,” Walsh wrote. “As you know I’m a very enthusiastic businessman and think £1,000 is an insult. I have attached proof of payment of £50,000 to get the ball running. One thing you need to understand about doing business in Europe is we do things BIG. Please get back to me ASAP to discuss our next move.”

Solomon could barely contain his excitement when he saw the receipt suggesting money was on its way to him.

Checked my spam again and was greeted again with another business proposal which caught my attention. Like the last 2 times I wanted to waste their time so they don’t waste anyone else’s or before they prey on a vulnerable person. This is my largest haul to date a whopping £25 😂 Went with a very James Veitch approach 💯 Scammers 0 Ross 3. Solomon loves hurling 😅

However he was also concerned that the 50 grand had yet to hit his account when he responded to Walsh.

“My goodness you are real businessman,” he wrote. “Will begin trading immediately. I promise to make you rich.”

Solomon asked about the £50,000 which had yet appear in his “banking companys PayPal account” and he wondered if there was a problem.

The good news for Solomon was that Walsh had encountered this problem before and had a solution.

“You will be pleased to know I have had this problem many times before and it is an easy fix,” Walsh wrote.

“Essentially what’s happening is my bank are after freezing this transaction as they fear this may be a scam which I know it isn’t as we are now business partners.”

He said this was “the third time this happened to me and the bank quickly resolved the issue. In order to freeze the assets they need to see a small sum of money going from your account to mine to prove this isn’t a scam.”

He said the last time this had happened a transfer of £25 was sufficient.

But there was more.

“My banking manager also advised me to speak in code as we are making too much money to declare and the taxman could be spying on these emails. I’m confident you understand as you are a well established business man and no what’s up.”

Instead of money they were to use the word “high ball”, while transaction was to be replaced with “short puck out”. Business was to become “county final” and PayPal “the square”.

Solomon’s response was a delight. Using the suggested code words, he replied with an immortal phrase: “I have sent the requested high ball into the square. I still have not received a short puck out. Maybe there is problem again with your bank?”

Walsh responded with a short line offering Solomon some advice. “One thing you need to understand about a county final is never trust a short puck out.”

And that was that.

Walsh later published a screen grab from the Irish Cancer Society thanking him for the donation made to them – inadvertently – by Solomon.

Speaking to The Irish Times, Walsh said that since he had posted the exchange on Instagram and Facebook, he had almost overwhelmed by the responses.

He said he had come across UK comedians baiting scam artists and wanted to see if he could go further by getting con artists to part with their own money.

“I’d have no concerns that they will come after me but I have concerns that somebody, who might be elderly or gullible might think this sort of thing is real and then they could get out in a big way.”