‘I am completely obsessed with Irish women and feminism’ 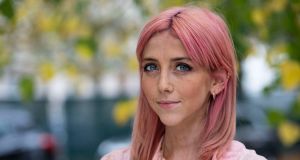 Back in May, Scarlett Curtis travelled to Dublin to record a live episode of her podcast Feminists Don’t Wear Pink. The sold-out crowd consisted mainly of young women gathered at the O’Reilly Theatre to watch as the pink-haired Curtis nattered about feminism, intersectionality and the Met Gala with her guests, Saoirse Ronan and Sinéad Burke. A few months later, she regards the event as “the best thing I’ve ever done” and speaks admiringly of Irish women.

“I am completely obsessed with Irish people and women at the moment,” she says. “Especially within feminism. There is such an incredible thing happening in Ireland, which I am just in awe of.”

If you haven’t heard of Scarlett Curtis, chances are the young women in your life have. The 24-year-old is a celebrated writer, activist, journalist and Generation Z whisperer. She has written for the likes of the Sunday Times, the Guardian, Vogue and Elle. She has interviewed everyone from Mindy Kaling to Keira Knightley for her podcast. She is a founder of the Pink Protest, a community and platform for female activism. Last year, she curated the bestselling anthology Feminists Don’t Wear Pink (and Other Lies), which featured essays on feminism from 52 notable women.

I dropped out of school again. I was in rehab. I was totally isolated. I could barely talk to my family. I was spending long periods of time on my own

Her latest project is It’s Not OK to Feel Blue (and Other Lies), an anthology of writing from 60 public figures reflecting on their own experiences with mental health. The book is curated by Curtis and features contributions from all sorts of household names. For example, Alastair Campbell pens a eulogy for his brother Donald, who suffered from schizophrenia. Emilia Clarke writes about the realities of living with a brain injury. Emma Thompson shares a list of tips for those contending with “low spirits”.

Curtis says she came up with the idea for the book while promoting Feminists Don’t Wear Pink (and Other Lies). “We did so many events around Feminists Don’t Wear Pink, and it was mostly young girls or young people who came to those events,” she says. “The thing that came up again and again and again was mental health. It felt like we couldn’t do anything apart from this. It was so pressing.”

The book was something of a passion project for Curtis, who has been candid about her own mental-health struggles. As a teenager she had an operation for scoliosis and subsequently experienced a period of chronic pain that led to her dropping out of school. At 17, she had another operation that got rid of her pain, but she was then diagnosed with depression, anxiety and post-traumatic stress disorder. “The fun big three,” she remarks. The years that followed were bleak.

“I dropped out of school again,” she says. “I was in rehab. I was totally isolated. I could barely talk to my family. I was spending long periods of time on my own.”

Eventually, she learned to accept the fact that mental health would always be a part of her life. “I think I always thought that it would just disappear one day,” she says. “But actually what I have realised over the last seven years is that it’s a daily practice to keep myself okay. It’s been so slow and I still have moments where I get very, very anxious and very low but it is something I live with now.”

One of the themes that often comes up in the book is the idea of privilege. Curtis is the daughter of the writer and director Richard Curtis and the broadcaster Emma Freud. At one point in the book, she writes that “my great, great grandpa kind of invented the idea of the self”. Her great-great-grandfather being Sigmund Freud, of course.

Acutely aware of her own status as a “posh white English girl”, Curtis made a conscious effort to solicit contributions from less well-known faces who had vital perspectives to share.

“I really wanted to find a way to make a book that addressed the intersectionality of mental health,” she says. “That wasn’t talking about mental health as a flat thing but was saying, ‘This is how race, gender, disability, class, language tie into mental health.’ We can only really do that by getting a lot of people to write on it.”

In one essay, she writes of feeling guilty for being depressed or anxious despite being “so lucky, so privileged” on the surface. Is that something she still grapples with?

“I always talk about mental health as if it’s two different things,” she says. “One is the chemical brain thing and one is the shame that’s added on top of that. The chemical brain thing is so hard to fix and takes years. The thing that you can help is the shame and I think the shame often gets worse if you are perceived to have success or happiness or a lovely life. That can just add to this feeling of, ‘What is wrong with me and why am I feeling this way?’

“I’ve definitely had that before where I’ll be feeling so anxious and then it’s worse because I know there’s nothing really to be worried about. That’s when you realise it’s just your brain being a bit mad.”

Growing up as the offspring of successful parents can be both a blessing and a curse. However, Curtis is close to both her parents and credits them with being supportive of her career. While she has never been tempted to follow them into film or television, she says she inherited her passion for activism from them. After all, her father is the co-founder of Comic Relief.

“When I was little, I used to tell people my parents worked for a charity,” she recalls. “I never thought about film because they only made two films when I was growing up. The thing they were doing every single day was Comic Relief and my Dad’s stuff with the UN. That was almost the religion of our family.”

Among the other things she inherited from her father is his voracious work ethic. He is the reason she stays up working all night, she jokes. “We fuel each other, which is so bad,” she says. “He’ll be like, ‘Ooh don’t go out tonight, just stay in and do your emails,’ and I’m like, ‘Ooh yeah, good idea.’ We both need to go to some course where we learn to chill out a bit.”

On the rare occasions Curtis does chill out, it’s often in the company of Saoirse Ronan. The pair are close friends after first crossing paths in New York a few years ago. Curtis was living and studying there at the time while Ronan was starring on Broadway in The Crucible. The two had mutual friends and Curtis suggested they meet up.

“I sent her this email like, ‘I’m here if you ever want to hang out or get coffee,’” she says. “I think I wrote, ‘We’ll either end up as the best of friends or the worst of enemies.’ We met and completely fell in love. She has changed my whole life. She was, in many ways, my first friend as an adult.”

For her part, Ronan has said that Curtis is partly responsible for sparking her feminist awakening.

“I am a feminist,” the actress declared on an episode of Feminists Don’t Wear Pink last year. “I think you’ve made me realise that I am one.”

She’s not the first young woman to say that of Curtis. And she won’t be the last.

It’s Not OK to Feel Blue (and Other Lies), edited by Scarlett Curtis, is published by Penguin