Gillian Lynne obituary: Dancer who breathed new life into musical theatre including ‘Phantom of the Opera’ 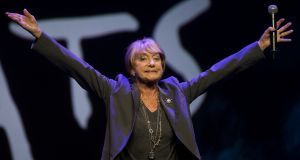 Gillian Lynne in 2015: she worked almost continuously until a few years ago. Photograph: Ian Langsdon/EPA

Gillian Lynne, a renowned British ballerina who, after turning to choreography, created the sinuous dances in Andrew Lloyd Webber’s “Cats”,” which became the longest-running musical in London’s West End and on Broadway, died on Sunday in London. She was 92.

It was nearly four decades after she began dancing at the Royal Ballet that Lynne started working with Lloyd Webber and the director Trevor Nunn on a musical about a tribe of cats that meets every year in a junkyard. There the cats, with names such as Rum Tum Tugger, Mr Mistoffelees and Grizabella, tell their stories to Old Deuteronomy, their wise leader, who will choose which one of them will be reborn.

Without a traditional book – the lyrics are TS Eliot’s poems in Old Possum’s Book of Practical Cats” – the musical relied heavily on Lynne’s dances.

“I was a strong dancer,” she told Dance Today magazine in 2014, “so I created it all on my own body initially, which is why I now have two metal hips and a metal foot.”

She also observed how cats moved – how her own white female, Scarlett, for one, undulated.

Cats, which opened in the West End in 1981 and ran for 8,949 performances there, won two Olivier Awards – for musical of the year and for Lynne’s choreography.

Gillian Barbara Pyrke was born in Bromley, Kent. When she was 8 years old, her hyperactivity led her mother to take her to a family doctor. While he examined Gillian, the doctor put on some music and asked Mrs Pyrke to leave the room with him.

“Out they went and the minute they had gone I started to dance to the music, even going up on his desk,” Lynne wrote in her autobiography, A Dancer in Wartime (2012). “What I hadn’t noticed was that his door was one of those beautiful old glass ones with etched designs through which the doctor and my mother were watching.”

As they observed Gillian dancing with abandon, she recalled, the doctor said: “There is no trouble with this child, Mrs Pyrke. She is a natural dancer – you must take her to dance class.”

At 15, Gillian was dancing at the Ballet Guild, a company whose artistic director, Molly Lake, gave her a new surname. “Don’t be silly, Gillian, it’s you!” Lynne recalled being told by Lake when she saw, to her surprise, “Gillian Lynne” printed in a Ballet Guild dance programme.

Soon after, she became a soloist with the prestigious Sadler’s Wells Ballet (later the Royal Ballet), where over seven years she danced many leading roles.

Lynne appeared onstage and on television throughout the 1950s, but when she replaced the choreographer of a revue called England Our England, a new direction beckoned. Her choreography for The Card, a 1973 West End musical starring Jim Dale, established a friendship with the producer Cameron Mackintosh, who several years later encouraged her to meet Lloyd Webber about the project that became Cats.

Lynne choreographed two subsequent musicals by Lloyd Webber, Aspects of Love and The Phantom of the Opera, and worked almost continuously until a few years ago.

Just past her 88th birthday, Lynne choreographed Miracle in the Gorbals for the Birmingham Royal Ballet. Speaking about its dancers during a rehearsal, she told the Financial Times: “I don’t believe in 15-minute breaks every hour, or whatever it is. I don’t think it gives the kids the brutish stamina they need.”

She added: “This generation needs to be encouraged not to give in.”

Dame Gillian Lynne died in a London hospital. Her second husband, Peter Land, is her only immediate survivor. Her previous marriage, to Patrick Back, ended in divorce.

Should women erase men from their lives? This writer thinks so
7

‘You guys are amazing’: Matt Damon’s message of support to Temple Street children, families and staff
8

Childcare around the world: How other countries do it better
Real news has value SUBSCRIBE