Jennifer O’Connell: You’re ‘failing’ at life. Here are 47 reasons why 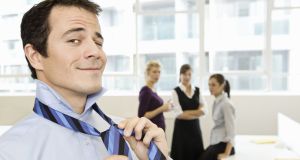 All of these lists and biz psych books, like so much of our corporate culture, are predicated on the same definition of a life well lived as a life spent in relentless pursuit of some other state.

There’s a type of list very popular on the internet at the moment. It’s a list that promises, often in 280 characters or less, to make you a better, more successful, richer person. Think of it as a fun-size version of Jordan B Peterson’s current global bestselling book, 12 Rules for Life, only without the lobsters or the conspiracy theories.

The original of the species came from a finance expert on Twitter with teeth like marble tombstones. When he’s not tweeting about cryptocurrencies, this chap likes to say cryptic things, statements that sound as if he typed the contents of a Christmas cracker into Google Translate, to the delight of his 140,000 followers. “Slow is smooth. Smooth is fast.” That kind of thing.

The particular tweet that launched the meme went: “The most successful people I’ve met: 1. Read constantly; 2. Workout daily; 3. Are innately curious; 4. Have laser focus; 5. Believe in themselves; 6. Build incredible teams; 7. Admit they know very little; 8. Constantly work to improve; 9. Demand excellence in everything they do.”

This surprisingly banal collection of commandments for the kind of people who use the phrase “smash it” unironically got 44,000 likes, so it’s safe to assume quite a few people didn’t find it banal.

The internet, as the internet likes to do, immediately started adding its own items. “Have rich parents.” “Are utterly ruthless.” “Read only airport books.” “Are egomaniacs.” “Are dead.” And so on. Marian Keyes created her own brilliant listicle, which included “Use aftershave as a weapon to overpower their enemies” and “Pass the psychopath test”.

As a species, we have an insatiable appetite for people willing to roar at us about the all the ways we’re failing to fulfil our destiny. I’d be tempted to argue this is what we get for letting religious orders have unfettered access to impressionable young minds, only it’s a global phenomenon.

LinkedIn is full of longer versions of these “47 reasons why you’re failing at life” listicles: 13 things you should give up if you want to be successful. 10 things successful entrepreneurs never tolerate. 6 things successful people do before 9am. The 10 obsessions you need to have to become a self-made millionaire. The 7 things I wish I knew when I graduated college.

So are the self-help and business sections of the bookshop.

I’ll save you the trouble of reading them: most involve getting up at 5am, packing more into your day, reading only books recommended by Bill Gates, breaking stuff (cheers, Mark Zuckerberg), and treating people like motorway service stations on the road to the success which you believe to be your birthright.

Things that are the enemy of achievement include: hesitation, lie-ins, caring for other people, enjoyment, indolence, empathy, doubt, clutter, sentimentality – along with any and all interactions with other humans lacking a clear self-improvement pay-off. They don’t expressly forbid lying in a hammock and thinking about nothing more profound than whether you need that Jaffa cake and if that’s really a mosquito and how long you’ve got before your children find you, but they probably don’t think they need to.

“Apathy and laziness will drag you down like a rock tied to your leg in the middle of a lake,” goes one alarmingly graphic metaphor in a LinkedIn article, no doubt constructed to provide guidance for just such a scenario.

The first thing you’re left with when you read yet another of these lists is the sense that you’re doing everything wrong. The second thing, hopefully, is that it’s not you, it’s them.

All of these lists and biz psych books, like so much of our corporate culture, are predicated on the same definition of a life well lived as a life spent in relentless pursuit of some other state. There is no room for standing still, even for a moment, to enjoy the view from where you are right now. There’s no space for joy or silliness or empathy; no consideration of the need to give anything back; no room for healing or recalibrating, or making art, or messing up, or forgiving yourself. No space for anything except barrelling ahead in pursuit of money and power until the day there are no more days.

If it’s lists you’re after, the one I always go back to is the list published by a palliative care nurse, Bronnie Ware, six years ago about the top five regrets of the dying. Funny enough, no one in her book mentioned missing out on developing a laser focus, or building less than incredible teams, or not getting up at 5am for Crossfit. Instead, they regretted things like working too hard, losing touch with their friends, not having the courage to express their feelings, and not allowing themselves to feel joy. The most common regret of all was that they had lived their life according to the expectations of others, instead of being true to themselves. Our generation will probably need to add a sixth: spending so much time in a digital world that is engineered to make us feel bad, consuming things that make us feel bad, and then feeling bad about it.