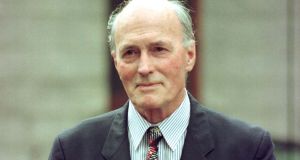 In 1992, months after the Supreme Court had ruled in the X case that the Eighth Amendment to the Constitution did not always rule out abortion, the government of Albert Reynolds sprang a surprise, disregarding party allegiance to elevate John Blayney to the court. His appointment was seen as a gesture to the “pro-life” lobby; Blayney had been to the forefront of the campaign for the adoption of the amendment in 1983.

Fears that Blayney’s moral views would affect his judgments misread the man. He was a highly orthodox lawyer sceptical of judicial activism, who believed judges were there to apply the letter of the law, not reshape the body politic. He sat on the court that upheld legislation allowing limited information to be given on lawful abortion facilities abroad.

In 1997, shortly before his retirement, he delivered a judgment lifting an injunction that prevented student unions from giving such information. Another judgment of his justified the court’s refusal to interfere with a questionable finding of fact by the High Court upholding the result of the divorce referendum.

But overall Blayney was content to join in court judgments rather than indulge in solo runs or dissents of his own. However, agreed judgments, such as that in the McKenna case precluding the expenditure of public money advocating amendments to the Constitution, bore the stamp of his unrelenting legal logic.

Blayney’s own immediate background was medical. His father, Ulster man Alexander Blayney, was a surgeon in the Mater hospital; he died suddenly out walking on Portmarnock golf links when John was an infant. John’s mother, Mary (nee Stanton), provided a legal inheritance, being the daughter of a Cork solicitor and grand-daughter of John Baldwin Murphy, one of a relatively small number of Catholic Queen’s Counsel in Victorian Ireland. Born on March 15th, 1925, John, the fourth Blayney child, was brought up on Ailesbury Road and attended Belvedere before boarding at Glenstal, then a new school with only a handful of boys.

At University College Dublin he took a first in classics, played on a rugby XV that won the Leinster Cup and on a tennis team that defeated Oxford. He was called to the Bar in 1948 and joined the northern circuit.

Tall and fleet of foot, it was as a rugby player that he first hit the headlines. Praised for his crisp passing and whole-hearted tackling, he was selected to play for Ireland against Scotland at Lansdowne Road in 1950. He ran 40 yards to score a try that contributed to a 21-point victory. He was never picked again.

Blayney, a quiet, reserved man, albeit not without personal warmth, was not the stuff of knockabout barristers who give clients value by hectoring witnesses and berating opponents. He concentrated on conveyancing and kindred specialities requiring legal expertise. This allowed him to spend more time at home with his beloved French wife, Bernadette, whom he married in 1953, and his six children. He also lectured on land law in University College Dublin

An anchorman for Fine Gael in the Law Library, he was often briefed by his close friend attorney general Declan Costello and became a senior counsel after the party returned to government in 1973. Blayney’s fluency in French, expertise in European law and subtle legal mind fitted him ideally to contest cases in European courts.

It was assumed that he would be offered a High Court judgeship when Fine Gael returned to office in the 1980s. However, his role supporting the pro-life Eighth Amendment was held against him and he was not appointed until 1986.

In an early judgment of impeccable legal logic that was, however, reversed by the Supreme Court on constitutional grounds, Blayney upheld against the State the possessory title of the finder of the valuable Derrynaflan Hoard. Although, as a practitioner he had had done little criminal work, he proved an excellent trial judge. Here, as elsewhere, his courtesy was appreciated and the clarity of his judgments admired. He also impressed as an ad hoc Irish judge on European courts.

In retirement after 1997, Blayney chaired a committee set up by the Chartered Accountants Institute in the wake of the McCracken tribunal. The committee made adverse findings about firms that had facilitated concealment of payments made to fund Charlie Haughey’s lifestyle. In 2004, as an inspector appointed by the High Court, Blayney reported that the National Irish Bank had overcharged some customers and that employees had encouraged tax evasion by others.

A devout, committed Catholic, he served on an advisory committee to the Irish bishops on the victims of child abuse. He was awarded a papal knighthood.

Exceptionally fit until his final years, he played tennis well into his 80s at Fitzwilliam.

He is survived by his wife, four sons and two daughters.