Patrick Freyne joins a session at Fun Direction, which encourages girls to play sport and where he learns that unicorns poop candies, but definitely not trains 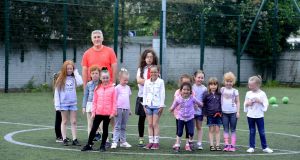 In an artificial all-weather football pitch beside a youth club in East Wall in Dublin, 12 small girls are running and jumping over obstacles , while a man named Ciaran Duffy shouts good-natured instructions.

“Who’s the best at this?” I ask one subgroup of three girls.

“No, we’re both the best,” says Eva, throwing her arms around Millie, “because we both love unicorns.”

“I hate unicorns,” says Lilly matter-of-factly as she hop-skips by. “They’re for babies.”

“Unicorns are real,” says Millie, who is wearing a unicorn tee-shirt. “There’s a legend about unicorns.”

“What’s so great about unicorns?” I ask (as a journalist you’re trained to ask the difficult questions).

“They poop rainbows and cupcakes,” says Millie, and I have to say I wasn’t expecting this answer.

“No they don’t,” says Lilly, hopping by.

“No they don’t,” says Lilly, hopping by.

“But not trains,” clarifies Millie, as though this has been a point of conjecture in the past. “They don’t poop trains.”

Girls like sport too if they’re given the opportunity. And if they’re not doing it at a young age they miss out on a key phase of learning fundamental skills

I am at a session run by Fun Direction, a social enterprise established by Duffy four years ago to encourage young girls in the inner city to play sport. I am learning a lot, and not just about unicorn digestion.

“In disadvantaged areas, parents often put the boys out playing sport because they think it puts them on a pathway to keep out of trouble,” says Duffy, “and it does, but girls like sport too if they’re given the opportunity. And if they’re not doing it at a young age they miss out on a key phase of learning fundamental skills.”

Duffy, who lives in Clontarf, now runs Fun Direction in eight locations across Dublin’s north-inner city, with between 10 and 20 girls aged between five and 10 in each group. He also runs week-long summer projects, organises day trips to universities and brings in experts for talks on nutrition and martial arts.

He has some support from Dublin City Council and he works directly with three schools and three after-school programmes. He also collaborates with Central Washington University and a similar project that runs in Germany (he recently brought some of the girls on a trip to Germany). He also gets help from his 10-year-old daughter, Emma.

She’s not in the business of throwing away compliments for nothing. “Kind of,” she says. Duffy laughs.

“It’s about removing barriers,” he says. “Transport is an issue and cost is an issue. We do it in the heart of the community so they can walk here. And we charge only €2 so there’s some sort of value put on it, but it’s not a barrier. A lot of the children come from single-parent families where the boy will be brought to sport and then there’s no one left to bring a girl to sport . . . If they have the opportunity, they enjoy it just as much. It’s a little bit about educating the parents as well and that’s been a feature of it too.”

I go stand with some of the parents who’re watching from the sidelines. Esther Sheridan, mother of unicorn-aficionado Millie, thinks the project has huge benefits. “At the minute, there’s another club doing soccer and you can see the girls from Fun Direction are loving it because they’re used to doing sport,” she says. “You can see a difference. They’ve loads of confidence and they join in a lot quicker. There’s no holding them back.”

She acknowledges there aren’t as many sporting opportunities in the area for girls as there are for boys. “Girls can join boxing and karate but it’s either boys and girls or a boys’ class,” she says. “There’s nothing just for girls. And here it’s different sports every week. Athletics, football, Gaelic, hurley.” She laughs. “They hate hurley. When you get a text saying it’s going to be hurley, you don’t tell them. Otherwise they moan for the day.”

She used to be very clumsy and really unbalanced, but she’s really got on her feet since she started doing the sports. You wouldn’t believe the change in her

Later, I ask some of the girls why they don’t like hurling. It transpires they don’t call it “hurley” they call it “the one with the helmets”.

“The helmets are bobbly on our heads,” explains a girl called Molly.

At this stage, the girls are playing a game where they are broken up into four groups and have to steal soft balls from one another. Duffy is shouting encouragement. Lilly, the unicorn-agnostic, is lying on five balls trying to stop the other girls from getting them.

A toddler is also wandering around in the middle if it all and his mother, Ina O’Connor, has to sporadically run onto the field to take him out of the flight path of a yelling girl. Her daughters, Maya and Enya, have been coming here for a few years now. “They love it,” she says. “Maya especially. She used to be very clumsy and really unbalanced. I was actually worried about her, but she’s really got on her feet since she started doing the sports. You wouldn’t believe the change in her. And I really like that it’s a bit rougher . . . Not that it’s rough, but it’s not a touchy-feely kind of thing. Enya, the older one, used to cry every time the ball would hit her. Since then, she’s toughened up and loves it. They tire each other out and get exhausted in the end. They fight less. They sleep.”

Over the course of an hour, Duffy takes the girls through their paces from one game to another. The girls spend the time between activities doing cartwheels or giving each other piggy backs or doing little dances. One little girl, Evelyn, shows us the medal she won in an after-school football match between the girls and the boys. What was the girls’ team called? “Unicorn Sparkles,” says Evelyn.

The Irish Times photographer tries to gather them between the goalposts for a photograph and half of them start climbing the net.

“What are you doing?” asks the Irish Times photographer with comedic exasperation.

Throughout the hour, Duffy deals with tearful complaints deftly and kindly.

“Well where’s your bottle?” asks Duffy (everyone brings a bottle of water).

“They keep skipping me!”

“Everyone gets a turn,” says Duffy.

“My socks are gone all black!”

“But I told you not to take your runners off,” says Duffy.

“He’s the most patient man in the world,” says O’Connor. “I can’t even keep my three under control but when he says something they all do it.”

“Ciaran, can me and Millie be together?”

“Ciaran, which side is Nicole on?”

“Ciaran, can Sophia swap with somebody?”

Duffy, who has also coached boys in his time, notes this is one key behavioural difference he can sees between the genders. “With boys, when you’re picking two teams the boys want to be with the best players whereas the girls want to be with their friends,” he says. “It’s a little bit more social.”

Duffy would like, over time, to see Project Fun Direction expand and other volunteers take up the techniques he uses. “Girls deserve these opportunities,” he says. “Not all of them are going to play sports but at least if they’ve tried different sports early on they’re in a much better position to do it if they want to later. It’s very hard to ask an 11-year-old girl to go play something when she’s never been active.”

In the meantime, he says, it’s all about fun. “If, at the end of each session, they walk away with a red face and have had an hour’s exercise and are happy, well, then that’s a result.”