The TV cook dusts off his old DJ decks and more than 2,000 dance records 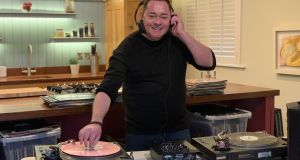 Chef Neven Maguire: ’I think people were a bit shocked when I shared a video with some of my old records playing.’

He is one of the best-known faces in Ireland, but while Neven Maguire is usually associated with cooking up a storm in the kitchen, he has now created a flurry on social media by revealing his lifelong love of dance music.

Having rediscovered his teenage record collection, the chef stunned followers, some of whom were calling for him to host a virtual dance night to help beat the lockdown blues, with his unexpected musical taste, which includes house and trance artists such as Diddy, Scooter, Tall Paul and The Visions of Shiva.

“I think people were a bit shocked when I shared a video with some of my old records playing,” he says. “There has been a great bit of craic and banter about it, but, to be honest, I’m just thrilled to have rediscovered something I used to really enjoy.

There’s a lot of stuff there – drum’n’bass, hardcore, house, dance, progressive house – so I’m having a great time going through them all

“I’ve always been passionate about both food and cooking, but music was also a very big part of my life growing up. From the age of about 18 or 19, whenever I finished up early in the kitchen, I would head into Enniskillen to a local nightclub called Mirage, where I would DJ for the last hour. I didn’t get paid for it, but I got in for free and really loved it. My twin [David] also loved it, and there were two identical twins who worked in the kitchen as well, and they were into it too, so we would be dancing in the kitchen when we were doing the prep. It was great fun.”

For his 21st birthday, Maguire was given the decks he is currently playing his record collection on. And while he got many years of pleasure out of them, restaurant life took over and he soon became too busy to play music – until this year, when the lockdown temporarily closed his restaurant, MacNean House in Blacklion, Co Cavan, giving him the time needed to rediscover his hobby.

“I remember getting the decks for my birthday and was thrilled,” says the father of two. “I DJ’d for about five years, but as life got busier I just didn’t have the time any more, and at some stage the records and the equipment were moved to the attic.

“During the last lockdown I had thought of getting them out, but didn’t do anything about it. But then [my wife] Amelda got it down before Christmas and had it revamped by a good friend of mine. Then on Christmas Eve she had it all set up with a few records to get me started, and I can’t tell you how excited I was.”

Getting the rest of his collection out of storage took some doing, as Maguire has amassed almost 2,000 records over the years.

“I used to spend all my wages on either cookbooks or records, so there are a fair few of them all right. I remember my friend and I used to take the bus from Enniskillen to Dublin once a fortnight. We would leave at 10am and get there about 1pm, where we would go to Abbey Discs and Power Music before having a McDonald’s and taking the bus back home again.

“I just always loved music and have some really great records, including one which cost £30 at the time, and quite a few white-label prerelease editions. There’s a lot of stuff there – drum’n’bass, hardcore, house, dance, progressive house – so I’m having a great time going through them all. There is something about the nostalgia of music that really takes you to another place in time. Some of the records, I look at and wonder, Why in God’s name did I buy that rubbish. And then I would play it, and it would take me right back, and I’d love it.”

I think mixing and cooking are quite similar, as even though you might start with the same or similar ingredients, the result is always dependent on the individual

Maguire, who admits to a ‘baggy-trouser-wearing phase’, still really enjoys the music of his youth, including Epidemic by Exit EEE, Poltergeist Vicious Circles by Art of Trance, and House Collection with Jeremy Healy and Allister Whitehead, but says his twins, Connor and Lucia, aren’t so enamoured.

“I find it really uplifting, and although I love a wide variety of music, this has always been my favourite,” he says. “I don’t know whether it’s a throwback to my youth or just that it goes well with the buzz of working in a kitchen, but it’s fun and a great way to lose yourself. Also, I think mixing and cooking are quite similar, as even though you might start with the same or similar ingredients, the result is always dependent on the individual.

“And although I never stopped liking this type of music, I just didn’t have the time to listen to it, apart from when I would be in the car by myself for long journeys. Amelda likes it too, but the twins are a different story, and when they saw the kit and heard the music they said, ‘Janey Daddy, what’s that?’ I think they find it funny more than anything.”

Maguire has a studio behind the house where he records cookery demos, so it’s the perfect place for him to listen to music, and although he isn’t planning on hanging up his chef’s whites any time soon, this rekindled passion is something he will definitely continue with.

“I’ve been spending three or four hours at a time listening to music and am really enjoying myself,” he says. “I’ve never had the time before, so it’s just fantastic. I can’t stop thanking Amelda for doing it for me.

“I am definitely going to do a bit of recording at some stage, even though I’m a bit rusty at mixing right now, and I certainly won’t be on the decks at Electric Picnic any time soon.

“But I’ve learned a lot from lockdown, and making time for music and other things I enjoy is going to be part of the future. I’m 46 now and have decided that I won’t be going back to working at the pace I was at before. I’ve loved spending time with the family and have enjoyed putting together my cookware collection for Dunnes Stores, but I’m really looking forward to going back into the kitchen and opening up the restaurant again.

“And, rest assured, the customers needn’t worry: I won’t be playing my old records in MacNean House. I’ll keep that to myself.”