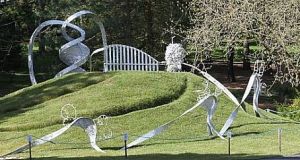 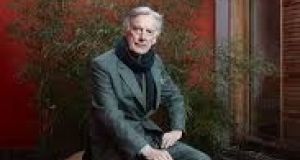 Charles Jencks, who has died aged 80, was a highly inventive landscape designer, a leading thinker on postmodernism and co-founder of the Maggie’s Cancer Care Centres across the UK and beyond.

Although American by birth, Jenck lived most of his adult life in Britain and it is there where many of his extraordinary outdoor architectural designs were created. Inspired by scientific theories and natural processes, Jencks hybrid landforms combine architecture with sculpture and symbolism provoking the visitor to interpret the landscape afresh. He believed that science was a great force for creativity because it informs us about the universe while showing us the patterns of beauty.

Signature Jencks pieces can be seen at the Gallery of Modern Art in Edinburgh, Parco Portello in Milan, the Olympic Forest Park in Beijing and in Suncheon City, South Korea. His symbolic DNA sculptures were installed at the Royal Botanic Gardens in Kew, Cambridge University, at the National Botanic Gardens in Dublin and for James Watson [who with Francis Crick won the Nobel Prize for Medicine in 1962 for their discovery of the double helix structure of the DNA molecule] at Cold Spring Harbor Laboratories, Long Island.

One of his biggest works is Northumberlandia, aka the Lady of the North, a huge effigy of a reclining naked woman with 34-metre-high grassy breasts, next to an opencast mine north of Newcastle. These unusual landscape designs were dismissed by some as cod-scientific kitsch, but, as Jencks was fond of saying of his own extraordinary home in London: “If you can’t take the kitsch, get out of the kitchen.”

A prolific writer on architecture, Jencks published more than 30 books. These include The Language of Postmodern Architecture (1977), The Story of Post Modernism (2011), The Universe in the Landscape (2011) and The Architecture of Hope: Maggie’s Cancer Caring Centres (2010 and 2015).

Born in Baltimore, Maryland, Jencks was the son of pianist and composer, Gardner Platt Jencks and his wife, Ruth De Witt Pearl. He attended Brooks School in North Andover, Massachusetts, and spent summers in Connecticut and Cape Cod where artists and intellectuals had a formative influence on his outlook.

His first built structure was a small studio in the woods of his family home in Cape Cod, which he playfully called the Garagia Rotunda. Jencks studied English literature at Harvard University, followed by a Master of Arts degree in architecture from the Harvard Graduate School of Design in 1965. Walter Gropius, the founder of Bauhaus, was the head of the school at the time.

Jencks moved to the UK in 1965 and in 1970 completed a PhD in architectural history, studying under the radical modernist Reyner Banham at University College, London. He quickly gained a reputation as a commentator on postmodern architecture, especially following the publication of The Language of Post-Modern Architecture, which ran to several editions. Jencks claimed that modern architecture concentrated on univalent forms such as right angles and square buildings often resembling office buildings but that postmodern architecture focused on forms derived from the mind, body, city context, and nature. He believed a building should reflect both the environment and symbolic value and his preferred style was radical eclecticism.

In his book The Iconic Building, Jencks explored trend setting and celebrity culture. He said that modern culture seeks the iconic building because it has the possibility of reversing the economic trend of a flagging conurbation.

Jencks was married to Pamela Balding from 1961 to 1973. The couple had two sons, Ivor and Justin. His second marriage was to Maggie Keswick with whom he had two more children: John Jencks, a London-based filmmaker, and Lily Clare Jencks, an architect.

The couple designed their London home with the postmodern architects, Terry Farrell and Michael Graves. The house in Holland Park with its layered interior, pedimented bookshelves, sundial window seat, and jacuzzi in the form of an upside-down classical dome was given a Grade 1 listing by Historic England in 2018. Plans are afoot to convert it to a museum.

In the family’s second home, Portrach House near Dumfries in Scotland, Jenck’s created the Garden of Cosmic Speculation, a series of 20 areas designed around various metaphors such as the DNA garden, Quark Walk, Fractal terrace and Comet Bridge.

A prominent, outspoken, witty and warm figure in the world of British architecture, Jencks lectured at more than 40 universities in Europe, North America, China and Japan. He also wrote feature films for the BBC on Le Corbusier, Frank Lloyd Wright and Michael Graves and was a visiting professor to the University of California in Los Angeles from 1974-1992.

A striking figure, often dressed in a purple velvet suit, deep-brimmed hat and a scarf draped over one shoulder, Jencks embodied the flamboyant American academic. To some critics, his journalistic style and lack of rigid consistency put him more in the category of zeitgeist chaser than serious historian, but his ideas were all the more influential for it.

After Maggie Keswick died in 1995, Jencks cofounded the Maggie’s Cancer Care Centres. Major architects such as Frank Gehry, Norman Foster and Zaha Hadid did pro bono designs of comforting places of respite for those with cancer, their families and friends for the charity. Jencks married Louisa Lane Fox in 2006 and became the stepfather to her children, Henry Lane Fox and and Martha Lane Fox.

From 2010 to 2015, Jencks worked on the Crawick Multiverse, a 55-acre site in southwest Scotland. This project developed and funded by Richard Buccleuch hosts a three-day festival of performance art and public debates with the world leading cosmologists and scientists.

Jencks is survived by Louisa Lane Fox, his four children and two stepchildren.