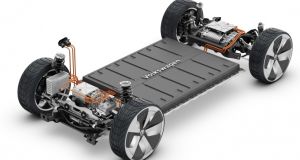 VW is in effect opening a new line of business as it offers rivals its expertise in electric technology, which it plans to invest €30 billion in between 2019 and 2023

Volkswagen has agreed to license its electric chassis to a German start-up in a new phase for the world’s largest carmaker as it seeks to rapidly become the leader in battery-powered vehicles.

VW is in effect opening a new line of business as it offers rivals its expertise in electric technology, which it plans to invest €30 billion in between 2019 and 2023.

The electric car start-up e.Go will design its vehicles using the chassis, known as MEB, that VW has been developing over the past three years for battery-powered vehicles. This chassis can be used for a variety of different car models.

“With the MEB platform, we are now transferring this successful concept to the electric era and opening it to other carmakers,” he said.

VW has previously acknowledged it may allow Ford and others to use MEB.

The group estimates that 50 different models will use the electric chassis across its 12 brands by 2025, beginning with the ID Neo later this year.

VW’s new partnership was announced at the launch event for the Geneva Motor Show, which opens to the public on Thursday and runs until March 17th.

Mr Schuh said VW’s technology will help his company make small batch production vehicles more quickly as it aims to create as many as 100,000 vehicles annually by 2022. “The MEB platform will make us faster, more robust and cost-efficient,” he said.

By licensing the electric platform to third parties, VW said it aims for cut costs via “the widest possible deployment” for a product, battery-powered cars, where profits have proved elusive.

The partnership with e.Go is also meant to highlight the flexible nature of MEB, an “electric skateboard” based on a battery pack that is scaleable like the squares that make up a chocolate bar.

Customers can buy cheap 60 kilowatt hour batteries with limited range, or pay up for 100kWh batteries to offer up to 700km of range, according to VW executives.