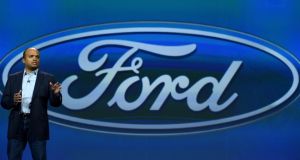 A top Ford executive has been forced out after reported misconduct in another blow to the reputation of the Detroit carmaker at a time when its share price and profits are flagging.

Ford said on Wednesday that Raj Nair, a company veteran who was president of the North American business that generates most of its profits, would leave immediately after an internal investigation into reports of inappropriate behaviour.

“The review determined certain behaviour by Mr Nair was inconsistent with the company’s code of conduct,” the company said in a statement. Ford refused to specify the nature of the misconduct, but sources close to the company said no financial malfeasance was involved, and the conduct involved personal relations.

“We made this decision after a thorough review and careful consideration,” Jim Hackett, Ford’s president and chief executive, said. “Ford is deeply committed to providing and nurturing a safe and respectful culture, and we expect our leaders to fully uphold these values.”

Mr Nair said: “I sincerely regret that there have been instances where I have not exhibited leadership behaviours consistent with the principles that the company and I have always espoused.” He added: “I continue to have the utmost faith in the people of Ford Motor Company and wish them continued success.”

Mr Nair was considered one of the company’s rising stars, having previously served as head of global product development and chief technical officer. His departure comes on the heels of news late last month that Ford’s head of China operations, Jason Luo, would leave after only five months in the job, for personal reasons.

A further blow to investor confidence was the departure earlier this month of Ali Vahabzadeh, chief executive of Chariot, the ride-sharing start-up that Ford acquired in 2016 and recently launched in London. Ford also replaced its own chief executive, Mark Fields, less than a year ago.

The string of departures comes at a time when Ford has predicted that profits will slip this year in the face of a flat US car market. Investors are also concerned that it is lagging General Motors in developing the self-driving and electric cars that will power its future.

“Another senior leadership change is the last thing Ford needs to deal with right now. It’s been a revolving door at the top of Ford for the last year, and with declining US sales and pressure to show progress on its mobility strategy, the company really needs consistent, focused leadership,” Jessica Caldwell, of the auto research consultancy Edmunds, said