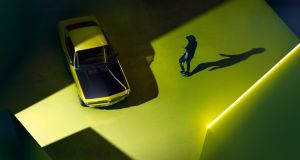 Dubbed the Opel Manta GSe ElektroMOD, this original two-door coupe gets some decidedly modern fixtures and fittings. The ‘Elektro’ bit of the name actually refers to another Opel car celebrating its 50th birthday - the Opel Elektro GT concept that that set world records for electric vehicles.

The MOD bit is, obviously, a reference to the current trend for ‘restomods’ - updates and upgrades of classic cars with modern engines and electronics, or indeed electric drive. The German car maker says that the Manta GSe has a “fully digital cockpit” which suggests that it’s been fitted with the two-screen dashboard layout from the new Mokka-e electric crossover.

The Manta GSe also uses some other Mokka-e parts, including a modern-looking ‘Vizor’ front end, which replaces the original slatted grille and twin, round, headlights. The Manta also appears to have LED lights from the Mokka-e, complete with the ‘eyebrow’ style daytime running lights. The ‘Vizor’ styling of the Mokka, and its optional black bonnet, was supposedly influenced by the original Manta, so this seems like timely payback.

Opel hasn’t revealed the technical specifications of the electric Manta, but the most likely option is that it’s using the same 50kWh battery pack and the 100kW (136hp) electric motor as the Mokka-e and Corsa-e.

Sadly (that word again…) Opel isn’t going to be putting an electric restomod Manta into any kind of serious, series production, but we hold out hope that a small handful of these might yet be made, as Jaguar has done with the electric E-Type. Right now, we could use some cheering up, and a sideways, silent Manta might be just the ticket.