Volkswagen plans to make cheaper electric batteries – and plenty of them 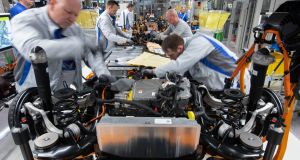 If you assume that all of these batteries will be used in 58kWh packs that would be enough capacity for 4.1 million car. Photo: AP Photo/Jens Meyer

Volkswagen, which – thanks in part to trying to make up for its diesel cheating disaster – is making huge inroads into the electric car market, and has plans for even more EV models in the coming years. To help keep all those new electric cars rolling, the German giant is committing to no fewer than six massive battery factories (VW hasn’t used the word “Gigafactory” but that’s what we’re talking about here) across Europe.

By 2030, it’s planned that those factories will be producing some 240gWh (gigawatt-hours) of batteries each year.

To put that in context, if you assume that all of these batteries will be used in 58kWh packs (the mid-spec size of battery for both the current VW ID.3 and ID.4 electric cars) that would be enough capacity for 4.1 million cars.

VW already has two plants up and running. One is in Salzgitter, Germany, which for the past two years has been working on new battery tech and operating as a battery prototype and pilot production plant. The plan is that, by 2030, Salzgitter will be making some 40gWh of batteries each year.

So too will the existing factory at Skellefteå in Sweden, which VW jointly operates with Swedish firm Northvolt. That too will expand its production up to 40gWh each year. VW says that it’s looking at other possible partners and locations for the four other battery plants. Skellefteå will make batteries for high-end premium models, while Salzgitter will concentrate on volume markets.

It’s not just that VW plans to make more batteries, it also plans to make cheaper batteries. The German car giant says that it will make a “unified” battery cell design, which can be used across all of the models that it makes. That in itself will bring down costs, but so too will a greater concentration on recycling. VW expects that it can recycle and reuse as much as 95 per cent of each battery, which should significantly bring down production costs.

“We will use our economies of scale to the benefit of our customers when it comes to the battery too. On average, we will drive down the cost of battery systems to significantly below €100 per kilowatt hour.

By working on modifying both the anode and cathode of the battery (the positive and negative poles, effectively) VW reckons that it can reduce charging times. For an equivalent 450km-range battery, which takes 25 minutes to charge to 80 per cent today, from a high-speed charger, VW says that will shortly be cut to 17 minutes, and after 2025 to as little as 12 minutes.

Further savings can be made, VW says, by more tightly integrating its supply chain, and also increasing the amount of recycling and re-use done in its supplier companies. The plan is to bring a “closed loop” approach to battery design and production, going from first use (in cars), to second use (as “powerwalls” in homes and businesses), to recycling and back to use in cars.

So as to make sure that all those new electric car drivers don’t find themselves stranded at the side of the road with flat batteries, VW is also investing €400 million (with more cash coming from partners) in public rapid-charging points.

Chargers with speeds of up to 150kW will be installed across the United Kingdom, Germany, Spain, and Italy thanks to partnerships with BP, ARAL, Enel, and Iberdrola. The German carmaker is also committing to installing another 3,500 public chargers in the United States and 17,000 in China.

In spite of all this battery investment, VW says that its bottom line is still secure, and that the overall VW Group is “adhering to its strategic financial targets and continues to aim for a capex ratio of around six percent by 2025 and an annual clean net cash flow of more than 10 billion in its core automotive business”.

“E-mobility has become core business for us. We are now systematically integrating additional stages in the value chain. We secure a long-term pole position in the race for the best battery and best customer experience in the age of zero emission mobility,” says Herbert Diess, VW’s chairman of the board.