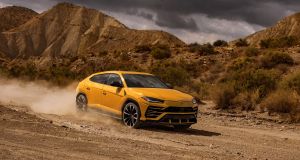 Customers have already snapped up the first year of production of Lamborghini’s super SUV, the Urus.

In a big day for the Italian supercar brand, it also confirmed its 2017 sales crossed the €1 billion threshold for the first time, with €1.009 billion in turnover, on the back of 10-per cent sales growth to 3,815 cars.

The Audi-owned brand has tripled its volumes since 2010, and it has built-in capacity for 7000 cars a year when the Urus comes on stream.

“Lamborghini has presented the Urus, its first super SUV, which has had a terrific response from the customers,” Audi Chairman Rupert Stadler said today.

“After just one month of taking orders, the entire production of the year 2018 was sold out.”

Its V12 Aventador found six percent more homes in 2017 to grow to 1173 sales, while the Huracán volumes rose 12 percent to 2642. Its biggest market was the US, with 1095 sales, followed by Japan, the UK, Germany, China and Canada.

“The response that we have received for our super SUV is really unbelievable considering that we just launched the car statically,” Automobili Lamborghini Chairman and CEO Stefano Domenicali said during an interview at this month’s Geneva motor show.

“The first car on the street will be starting in early summer, therefore I’m expecting as soon as everyone will have the chance to drive, the real step.

“We are really proud and now it’s on our side to make sure that when the car will be there it will be perfect and the service of the dealer will be at the standard that we want to give.”

Domenicali took great pains to explain that Lamborghini had been retraining dealers, service technicians and even its own regional management to cope with the expected higher volumes - and higher mileage - of the Urus.

“Training, understanding, explanation, knowledge of this new model. And of course, what has to be very clear is that this car is a daily, usable car.

“We expect high mileage, and this is not a problem because in terms of quality, the standard we have is very, very high.

“But in terms of expectations of even the little things you are expected to do as a dealership it is different. Maybe you have to do something from day to night, because maybe the day after it won’t be right for the customer. That is the difference everybody understands.”

And Lamborghini will be doing it on the back of a record year, with record growth not just in sales, but also in the size of their factory. The Lamborghini production facility has grown from 80,000 m2 to 160,000 m2, bringing 500 new jobs with it.

“Lamborghini realised another record year and we are once more outperforming our financial objectives,” Domenicali said.

“This was achieved while mastering an unprecedented double challenge: preparing for new models in our super sports car range, while simultaneously doubling production capacities at our headquarters.”