Geneva: Supercars on the show floor

Ferrari, Lamborghini, McLaren, Aston, and Bugatti all bring the noise to the Geneva show 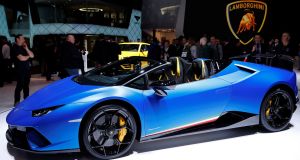 The Lamborghini Huracan Performante Spyder, one of the multiple supercars unveiled at the Geneva show. For all the talk of eo-friendly motoring and low emissions, there’s still some menace on offer in the motoring world

Motor show time is always and inevitably supercar time, and while these ultra-fast, multi-cylinder monsters might be increasingly out of step with modern sensibilities, there’s no denying the appeal (nor the profit margins) of high-high rockets with this much grunt.

Ferrari’s big star at Geneva isn’t actually a new car at all, but is instead a more hardcore version of the existing 488 GTB. This is the 488 Pista, and that’s not a spelling error, but instead the Italian for ‘track’ which is where this car was born to be. Yes you can drive it on the road, but if you’re going to fully exploit its 720 3.9-litre turbo engine, you really need to be somewhere with gravel traps.

Based heavily on Ferrari’s experience of creating and running the 488 GTE race cars in the World Endurance championship and at Le Mans, the Pista uses a clever s-duct built into the front bumper to create real downforce, which is balanced out by a huge diffuser sticking out of the back. 90kg lighter than a standard 488 GTB, even the engine itself is 18kg lighter. Ferrari has also fitted it with a new Side Slip Control system, which is basically a posh way of saying that it has a Ford Focus RS-style drift mode.

Lamborghini, too, has decided to warm over an existing model rather than create an all-new car, so it was taken the roof off of the Huracan Performante model and called it the Performante Spyder. It keeps the same 640hp 5.2-litre V10 engine, and is around 35kg lighter than the standard Huracan Spyder.

Neither powerful nor expensive enough? Well how about this; not satisfied with getting legendary Formula One designer Adrian Newey to create a mid-engined hypercar, nor getting the Red Bull F1 team to help engineer and build it, Aston Martin has decided that what its million-dollar (literally) Valkyrie needed was… a sportier version.

Enter the Valkyrie AMR Pro version, which not only has an 1,100hp V12 engine to go with its 1,000kg kerb weight (about what a Fiesta weighs) but now has a revised and updated aerodynamic package, making it more slippery, but also more grippy thanks to higher levels of downforce. It loses ‘luxury’ touches from the standard car such as the heating and air conditioning system (replaced by a polycarbonate windscreen with built-in demisting elements), it also gets fixed side windows, carbon-fibre suspension, moulded racing seats, and a lighter exhaust system.

Red Bull Racing’s chief technical officer, and the car’s designer, Adrian Newey said: “Seeing the Valkyrie AMR Pro and this year’s Aston Martin Red Bull Racing F1 show car together at Geneva is a special moment for me. The Aston Martin Valkyrie road car draws extensively from the knowledge I have gained during my career in Formula One, but the AMR Pro version has allowed me to work beyond the constraints of road legality, or indeed practicality! We’ve told a few of its secrets, but by no means all. I will leave it to the public to ponder the lap time predictions. Suffice to say they’re quite impressive.”

Speaking of 1,000kg, that’s how much downforce the new McLaren Senna GTR generates when it’s running at full speed. Only 75 of these trackday specials, based on the road-going Senna supercar, will be made. The 500 road versions have already sold out, but this hardcore model gets more power and torque — now up to 825hp, 25hp up on the road car — trick aerodynamics, and slick Pirelli racing tyres.

“The McLaren Senna was designed from the outset with the full spectrum of road and track requirements in mind, so developing a GTR version is within the scope of the original project,” explained McLaren Automotive design engineering director, Dan Parry-Williams. “The McLaren Senna GTR Concept unveiled in Geneva is not the finished article but it does give a clear indication of our thinking for the car, which promises to be the most extreme and exciting McLaren to drive for many years, if not ever.”

Still not enough for you? Well the king of supercars is at Geneva too — the Bugatti Chiron, this time being shown off in Sport format, which is 18kg lighter than the standard car, and which is said to be more agile and more aggressive to drive. Not that the 1,500hp standard version is anything less than pretty ferocious, mind you. The Sport doesn’t get any more grunt, but it does get torque vectoring for the four-wheel drive system, retuned suspension, and is said to be faster around the Bugatti test track than the standard model. Oh, and it gets carbon-fibre windscreen wipers, those are new, and they go nicely with the €2.65-million pre-tax price tag.

Better yet, Bugatti boss Stephan Winklemann confirmed at the show that the brand is considering expanding its range beyond a single hypercar, and may be plotting a massively over-powered four-door saloon. Watch this expensive space.

What sold for €310k and less in Blackrock, Clonsilla, Bray and Co Meath
3