ESB says it’s ready for more electric cars, but charges will go up

The 2030 deadline for fossil-fuel cars can be met by the grid, but e-car owners will have to pay for public charging 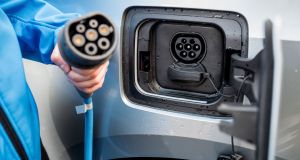 Will a switch to battery motoring mean brown-outs and lukewarm tea for the rest of us?

Of course, the idea is to stimulate the sales of purely electric vehicles, EVs that take their fuel from wires, not pumps, and which at the very least move their pollution and Co2 emissions to the power stations were they can be better controlled.

Are we ready, though? More specifically, is the national grid ready for, from 2030 onwards, something in the order of 100,000 electric cars and plugin hybrids all rolling home at 6pm and plugging in at once? Will a switch to battery motoring mean brown-outs and lukewarm tea for the rest of us?

Well, according to the ESB, no. The grid is already, so it says, ready for electric cars and even a sudden explosion in electric car sales would not put any significant extra demand on power generation. “As a rule of thumb, every 100,000 EVs would be expected to increase annual electricity demand by approximately 1 per cent. That is based on each EV driving approximately 17,000km per year” an ESB spokesperson told The Irish Times. “EVs use far less energy than their petrol or diesel equivalents, so it is a lower burden than most expect. Also, Ireland has a modern, and well-managed electricity distribution network with good capacity levels across the country. In addition, smart charging and metering can help customers choose to charge at off-peak times.”

That smart metering thing is a critical point for the future of electric cars, as it will also allow the grid to draw spare energy from electric cars that are plugged in at peak demand time, essentially buying the battery charge from the customer at peak rates, and then selling it back to them, charging the car, later on at off-peak rates. That will require significant investment in both smart meters and smart chargers, though – so how much is this all going to cost?

“We’ve calculated that today’s electricity distribution system can accommodate a 20 per cent penetration of electric vehicles at low cost,” the spokesperson told us. “Many of the investments which might help support electric vehicle charging are the same as those which will be needed to support Irish customers’ demand anyway. ESB Networks normally invests approximately €60 million per annum in building additional capacity into the electricity distribution system across the country to meet the natural growth in demand that occurs due to new housing and economic activity. Additional investment is also periodically required to meet new large demand requirements associated with large commercial activities such as data centres or other industrial developments.

“It is too soon to predict whether this increase in demand will impact electricity prices in the future, but the analysis completed by ESB Networks is that the network cost of supporting electric vehicles should at least meet the associated cost. In terms of the energy cost, many more significant variables such as generation inputs at a given time will have a significant bearing on this in future”

One thing is certain though, and that is that the days of picking up free charging from public points is over, and it’s going to be a lot more expensive to charge from those points as the ESB’s future plans take shape. There are currently discussions as to what form the management of public charging points will take, but the likelihood is that ESB’s E-Cars arm will be fully privatised in the short term, and that company will then set out its charging rates. Such privatisation of a much-needed public good may be worrisome, not least given the current mess that the broadband network is in, but the ESB says that there is no other viable solution right now.

“It is not sustainable, no matter what ownership model is put in place, for access to chargers to be provided free of charge on a long term basis. We believe that some form of fee structure, which is competitive with diesel, will be necessary in future, otherwise there will be no commercial incentive for anybody to invest and provide charging facilities. This is bearing in mind also that the majority of people will charge at home using cheaper night rate electricity.”

For those who do need charging when out and about, the hope is that private investors will start to replace filling stations with hubs of ultra-rapid charging points. “The ESB is currently looking at the feasibility of chargers with capacity of between 150kW and 350kW compared to the current fast charging rate of 50kW. This would allow a long range EV to charge to 80 per cent in as little as five minutes compared to 25 minutes today, transforming the user experience,” said the spokesperson. “We’re currently evaluating what the public charging infrastructure requirements are likely to be given the projected growth of EV numbers, battery range improvements and the expected increase in the rate of recharging. While we don’t have specific numbers to share at this stage it looks likely that charging hubs will develop, where numerous cars will be able to recharge their battery in a matter of minutes.

“With regard to the public charging network, over €30 million has been invested in it over the last eight years. ESB E-Cars has developed one of the first fully interoperable national charge point networks in Europe, comprising of almost 900 public charge points in the Republic of Ireland. A full range of the required supporting services for an effective EV system have also been deployed. These include a charge point management system which manages and controls the network in real time and supports a 24/7 customer help line and real time digital tools such as our online charge point map and app. A dedicated maintenance and operations team also support the network.”

Those 900 charging points are still fewer than the more than 1,500 that were originally promised when electric car sales began almost a decade ago, though, and there are still no firm plans in place at Government or county council level when it comes to simple things such as ensuring that petrol or diesel powered cars can’t park in front of and block a charger, or other incentives for EVs such as free motorway tolls.

According to the Department of Communications, Climate Action, and Environment, such things are still under the purview of a taskforce, which has yet to issue any firm recommendations. “A key focus of the work of the taskforce is examining options for infrastructure, regulation and pricing in order to devise a sustainable policy framework for effective and efficient electric vehicle charging. This includes examining options for the provision of public charging” said a spokesperson.

A final question is whether or not moving to electric cars actually does much good when it comes to emissions and pollution. Some car makers have recently been questioning the use of battery power, as so much electricity generation is still from fossil fuels, and there is an argument that hyper-efficient petrol engines can do a better job of converting dead dinosaurs into energy than the national grid.

According to a report from the Eirgrid Group, electric cars will only account for a tiny fraction of the project peak daily winter electricity demand but that, depending on how the various scenarios the report envisages play out, as much as half of all our electricity generation could still come from fossil fuels. Currently, the rule of thumb is that an electric car charging from the Irish national grid has equivalent emissions of about 80g/km, which is about as good as a mainstream non-plugin hybrid car. Assuming that improves by half by 2030, which is possible, that number would only drop to about 40g/km, which is about the level of a current plugin-hybrid.

The good news from all of this, then, is that the grid can cope even if we all ran out and bought a Nissan Leaf or a Tesla tomorrow. The bad news is that the days of free public charging are very much numbered, and that we still need to go some way to ensure that our electric cars are as clean as they claim to be.