Jaguar sneaks ahead of Audi in electric SUV race

New all-electric I-Pace expected to go on sale in Ireland this summer for about €85,000 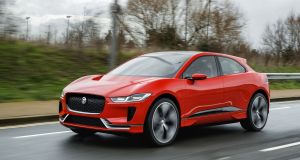 Long range: according to the newest, tougher economy test, the I-Pace will put some 480km between charge-ups

It was always going to be a bit nip and tuck, and a betting person might have put the heating money on the German giant getting there first with its upcoming E-Tron Quattro, but it is Jaguar which has won the race among the premium carmakers to put an all-electric SUV out in front of the public.

This is the I-Pace, a five-seat, medium-sized SUV so therefore not really a rival to the Tesla Model X in terms of size (the Tesla is bigger and has more seats) but very much a Tesla rival when it comes to the powertrain. In fact, Jaguar decided to publicise the I-Pace by drag-racing one against a Tesla Model X at the Autódromo Hermanos Rodríguez race track in Mexico City, where Jag’s Formula-E electric racing team will compete later this year.

The competition was to accelerate from standstill to 60mph (97km/h) and back to 0 again – against a 74kWh Tesla; the Jag won both acceleration and braking tests handily, driven by Jag’s Formula E racer Mitch Evans.

Presumably, a faster P100D Tesla Model X would have made mincemeat of the I-Pace, but Jaguar points out that for the P100D’s price tag, you could almost have two I-Paces…

On the engineering front, the I-Pace uses twin electric motors, one for each axle, giving the car four-wheel drive and a total output of 400hp. With 696Nm of torque to overcome the 2,133kg weight, the I-Pace can scamper to 100km/h from rest in 4.8 seconds.

More importantly, it has long, leggy one-charge range. According to the newest, tougher, WLTP economy and emissions test, the I-Pace will put some 480km between charge-ups, and Jaguar says that its 90kWh battery stack will charge to 80 per cent capacity in 40 minutes from a 100kW charging point. Now, there are not many (hardly any in fact) 100kW charging points around, so get used to sitting around waiting for your I-Pace to charge. An 80 per cent charge from a domestic 7kWh charging point will take more like 10 hours.

The I-Pace rides on an all-new platform, designed by Jaguar specifically for electric cars. It’s effectively an electric “skateboard” which contains the liquid-cooled battery pack, the electric motors, and the double-wishbone front, and multi-link rear suspension. Adaptive air suspension will be available as an option.

Although the I-Pace is relatively compact on the outside, about the same overall length as an XE saloon, its long 2.9-metre wheelbase means it is as spacious as a much larger car inside. It uses a development of the dual-screen In Control Touch Pro Duo touchscreen infotainment system, as seen in the Range Rover Velar, and heavily sculpted sports seats. Boot space, thanks to the packaging advantages of batteries and electric motors, is a massive 656 litres.

That infotainment system uses an advanced artificial intelligence system that uses road conditions, weather, temperature, and traffic levels to help predict a more accurate range-to-empty figure. “We set out with a clean-sheet approach to harness new battery electric technology with an architecture engineered from the outset to optimise performance, aerodynamics and interior space. The result is the I-Pace – a true Jaguar and truly driver-focused EV,” said Ian Hoban, the vehicle line director for the I-Pace.

“Where other companies talk about the future, we build it. We have torn up the rule book to create the newest member of the Pace family, the all-electric Jaguar I-Pace. With zero tailpipe emissions, no Co2 and no particulates, it moves us dramatically closer to our vision of a clean, safe and sustainable future,” said Dr Ralf Speth, Jaguar Land Rover’s chief executive.

The I-Pace will go on sale in July, priced from £58,995 in the United Kingdom, which would suggest a starting price of about €80,000-€85,000 here in Ireland. Jaguar Ireland is known to be keen to bring cars in as quickly as possible, not because it anticipates big sales for its electric EUV in Ireland (electric car sales in Ireland are currently running at just 0.3 per cent of the market) but because it sees a major publicity benefit from the car, and doesn’t want potential customers looking to the UK market for imports.