Electric car revolution may not be as clean as you think 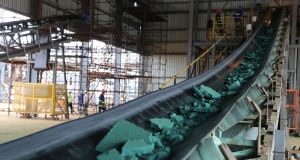 A conveyor belt carries chunks of raw cobalt at a plant in Lubumbashi, Democratic Republic of Congo, before being exported, mainly to China, to be refined. Inset: an electric battery. Photograph: AFP/Getty Images

Those of us hoping to salve our environmental conscience by driving an electric car may now have a new worry to face – that of both environmental destruction to get at the precious metals being used in batteries (lithium and cobalt chief among them) and of the potential for the use of child labour in those mining operations.

“Electric cars may not be as ‘clean’ as you would think. Customers need to be aware that their green cars could be linked to the misery of child labourers in the Democratic Republic of Congo.

“Would customers at the Paris Motor Show buy a car if they thought it had cost someone their childhood?” asked Mark Dummett, business and human rights researcher at Amnesty International.

“Amnesty International’s research shows that there is a significant risk of cobalt mined by children ending up in the batteries of electric cars. These vehicles are presented as the ethical choice for environmentally and socially conscious drivers, so the companies that manufacture them must come clean and prove they have acted diligently in getting their supplies.”

Why is cobalt so significant? Unlike the lithium which makes up the centre of the batteries, cobalt is crucial for the electrodes which carry electric charge to and from the lithium cells.

Without it, a battery is just a useless lump of metal and plastic.

According to the US Geological Survey, some 50 per cent of the world’s cobalt supplies are to be found under the ground of the Democratic Republic of Congo, a country which has become a byword for tragedy and exploitation in recent years.

Amnesty says that some 20 per cent of those reserves are mined by hand, and that mining companies are using illegal child labour to get at the cobalt.

Amnesty has accused carmakers such as BMW, Tesla, Renault-Nissan, Fiat-Chrysler and General Motors of using suppliers linked to illegal cobalt mining, and has warned that many other carmakers are likely to be sailing close to the wind.

While Mercedes-Benz, BMW, Fiat and Volkswagen have responded to Amnesty’s request for more vigilance when it comes to the battery supply chain, the human rights organisation has said that no company has yet given it a thorough breakdown of how it intends to tackle the issue.

“Without legislation that makes human rights due diligence mandatory, companies will continue to skirt the issue and benefit from child labour and other abuses,” said Dummett.

The problem leads into one of supply of the metals and material needed to make rechargeable batteries, not just for cars but for an increasing plethora of devices and consumer goods.

A perceived shortage of lithium for batteries created a sudden spike in the market price for that metal last summer.

This has since calmed down thanks to major miners and suppliers such as Chile’s SQM and China’s Jiangxi Ganfeng Lithium ramping up their extraction and production.

But simply put, do we have enough lithium? While mining can be made more intensive, and more can potentially be found, it’s quite possible that there may be shortages ahead.

Speaking to Reuters, Joe Lowry, lithium industry consultant and commentator, said that even with the recent spate of new lithium mining projects, it is quite possible that a “supply shortage will cause significant issues in the battery supply chain by 2023”.

Lowry accused Tesla boss Elon Musk, for one, of having a reckless approach, apparently believing that “if he builds cars, the lithium will come”.

As for cobalt, while like lithium it’s not a particularly rare metal, the current struggle is to find more of it that’s not in war-torn spots such as Democratic Republic of Congo.

Finds in Idaho in the US and Ontario in Canada show promise, apparently, but many analysts believe that as battery production expands, there will be at least a temporary shortage of cobalt, especially if mining operations in Congo are shunned.

So just as we start to cross the threshold of the electric car revolution, we run across the same old snags.

Just as with oil, we may have to deal with unsavoury characters to get the raw materials needed, and even when we have access to them, there may not be enough.

Put it this way, even in the midst of its diesel scandal, an official from Volkswagen told a lithium mining and supply conference in London last year that sourcing supplies of lithium and cobalt was the company’s number one concern.

Perhaps we shouldn’t be mothballing our petrols and diesels just yet.