Whether hybrid or plugin, Geneva 2018 marks the start of an unstoppable march towards electric cars 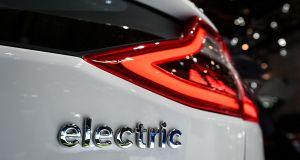 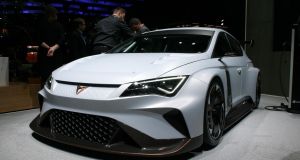 It’s still only a concept car, but Honda has, at the Geneva motor show, started taking orders for its cute, gorgeous, little Urban EV electric car. It’s a sign of tremendous confidence at Honda in the likely success of the car (which, stylistically, heavily channels both the original seventies Civic and the original VW Golf). It won’t be cheap, though.

Whispers on the Honda stand at the show were that the Urban EV will come with premium-style pricing, and it could end up as pricey as a bottom-end BMW i3. The CR-V Hybrid, also on the stand and coming with seven seats now, is a rather more realistic half-electric family car, and boasts a gearbox-less powertrain that Honda says uses electric power to save fuel on high-speed motorway runs.

Thankfully, for those hoping for rather more affordable battery power, Geneva 2018 showed that there will be some decent options for the less-well financially-endowed when it comes to electric cars. You don’t have to save up for a Tesla, it seems…

Skoda has confirmed that it will start making an all-electric version of the Citigo small car, which will go on sale in 2019. It will be closely related to the existing Volkswagen e-Up, but will come with a much-longer one-charge range of around 300km. It’s part of a big push by Skoda for more and more electric and hybrid powertrains.

The Czech brand also showed off its new Vision X concept car at the show (basically the new Yeti in all but name) fitted with a mild hybrid four-wheel drive system. Premium pricing? Unlikely, being as it’s Skoda. A plugin hybrid version of the Superb was also confirmed for next year.

Smart isn’t sold in the Irish market anymore, but the tiny car brand is going to join parent company Mercedes’ EQ electric car umbrella. Both ForTwo and ForFour showed up at Geneva boasting Brabus styling kits and fast charging times (no word on range, though) and if you’re disappointed you can’t buy one here, don’t be — the same tech will eventually appear in Renault’s  Twingo, which shares a chassis and factory with the Smarts.

Hyundai brought along one of the most affordable (probably — prices haven’t been announced yet) electric cars in the shape of the new Kona Electric. There are two versions — one with a 300km range, and one with a bigger 64kWh battery and a range close to 500km, and they will charge from a 7kW home charger in six and ten hours, respectively. Hyundai was also showing off its new Nexo hydrogen fuel cell SUV concept. Some commentators have opined that hydrogen power is better than battery power, because hydrogen is everywhere and lithium for batteries isn’t, but with no hydrogen refuelling network in Ireland (and none likely) it seems a bit of a moot point, for now.

Toyota is another company keen on taking the hydrogen route, but for Geneva it was concentrating on the new Auris hybrid. The Japanese giant made quite a stir at the show, promising to swear off diesels, starting this year, and the Auris will be a key part of that change, coming as it does with two hybrid versions (as well as a conventional 1.2 petrol).

The existing 1.8-litre 122hp hybrid carries over from the Prius and C-HR, but the Auris will also get Toyota’s new variable-valve-timed 2.0-litre engine, which boasts 180hp in hybrid form, and a reputed thermal efficiency rating of 41 per cent, making it one of the most efficient engines in the world. For all the promises of electric power, it’s the Auris Hybrid that will, in the short term, start putting more and more Irish motorists into an electric car. Well, a half-electric car.

Mind you, Nissan might have a thing or two to say about that. The new Leaf will arrive in Irish dealerships any day now, and comes with a quite reasonable price tag of €26,290 for the basic model. It’s not a new car at Geneva (although Nissan was touting its sales success there) but on the Nissan stand was the IMX electric crossover concept, which will become, in pretty short order, Nissan’s first electric SUV. Electric power allied to the sales success of the Qashqai? It could be a game-changer.

Speaking of electric SUVs, Ssangyong showed off a new all-electric concept, called the e-SIV. Looking rather like a sci-fi version of the Tivoli crossover, it boasts a 450km electric range, but Ssangyong was being vague about when, or if, it might make production.

Lexus compact UX crossover, revealed at the show, was also another nail in the diesel coffin. No diesel version will be offered, and Ireland is likely to only get the Hybrid version, using the same powertrain as the larger NX and RAV4 hybrids. As a half-electric rival to the likes of the BMW X1 and Audi Q3, it’s likely to be a thorn in the Germans’ sides later this year.

Arguably the biggest electric news at the show was the production-ready reveal of Jaguar’s new I-Pace, which will go on sale in July with a combination of 400hp and a claimed 500km one-charge range. Jaguar is making a great deal about the I-Pace’s early arrival onto the market, beating the rival Audi E-Tron Quattro by around five months. Audi brought along prototype E-Trons to Geneva, but declined to either let us see underneath the camouflage wrap, or to give us any firm details on the car’s performance. It’ll be interesting to see how well the Jag sells in Ireland. Jaguar Ireland isn’t expecting big numbers, but it’s pushing hard to get metal on the ground at the same time as the UK market, so that Irish customers don’t start drifting down the personal import route.

Mercedes has a similarly-sized all-electric SUV in the works, called the EQC, but it wasn’t physically at Geneva, relegated to whizzing around a distant Swedish frozen lake on a video wall. Mind you, Merc did bring along the AMG GT Four-Door Coupe, which can be had right away with midl-hybrid power, and which next year will get a plugin hybrid version with 800hp.

Seat is planning a move into the electric sphere too, but it might be going down the high-performance route first. The Spainsh brand showed off its E-racer concept, wearing both the badge of its new Cupra high-performance brand and a rear wing the size of a small village. Mind you, with 600hp, that rear wing might well be justified.

Renault showed off its all-electric EZ-GO pod concept, which isn not a car you can buy, but which might eventually be a fully autonomous robo-taxi, while Volkswagen displayed a version of is CEDRIC autonomous electric pod that has been specifically designed as a robotic school run vehicle. Renault did also show off an updated Zoe, currently Europe’s EV sales champ, which now comes with revised styling and a more powerful electric motor.

BMW was busy confirming that it has a new i4 four-door electric coupe in the works for a 2019 on-sale date, alongside the all-electric X3, but neither car was actually at the show.

Volkswagen’s massive, five-metre ID Vizzion was, lacking a steering wheel or pedals, and boasting fully autonomous drive. It’s a bit pie-in-the-sky as it stands, but expect to see a much-toned down version on sale by 2022, as an all-electric replacement for the luxury Phaeton saloon. Speaking of luxury, Bentley also showed off its first ever low-emissions vehicle, a Bentayga SUV using a Porsche-based plugin hybrid setup, with 75g/km of Co2 and a charging point designed by Phillipe Starck.

Volvo didn’t let the Germans (and anglo-Germans) grab too much of a lead in the electric performance stakes, giving a European debut to its 600hp Polestar 1 plugin hybrid coupe, which will go on sale (well, on lease) later this year. Its new V60 estate, launched at the show, will also come in plugin hybrid form with T6 (340hp) and T8 (400hp) variants.

Porsche’s Geneva show surprise is a 600hp all-electric crossover, based on the same architecture as its Mission E high-performance electric saloon, and Porsche boss Oliver Blume says that its a very realistic vision of a production model. ‘The Mission E Cross Turismo is an expression of how we envision the all-electric future. It combines sportiness and everyday practicality in unique style. Our vehicle will be fast to drive, but also quick to recharge and able to replicate its performance time after time” he said.

The Mission E Cross Turismo’s claimed performance figures are a top-speed of 250km/h and a 3.5sec 0-100km/h sprint time. Of equal importance is a claim that for every four minutes on charge, the Mission E can add 100km of battery range, although presumably that needs at least a 150kW charger, which are very thin on the ground right now.

Porsche must have thought that it had the unexpected electric car thing down pat, but it (and we) hadn’t counted on Aston Martin pulling a fast one. We had been half-expecting to see a production version of its upcoming DBX SUV, but instead we got the rather striking Aston Martin Lagonda Vision Concept, a glimpse of what could be, by 2021, a new super-luxury, all-electric saloon from Aston Martin. Aston and Lagonda were once separate companies, brought together by Aston’s owner David Brown in the 1947. The Lagonda name was used for a cult-favourite 1970s luxury saloon, with razor-edged styling by William Towns, and revived again two years ago for the Taraf saloon, which was designed primarily for Middle Eastern markets, using Aston’s 6.0-litre V12 engine.

Now, though, Lagonda looks set to be Aston’s technology leader, moving into all-electric powertrains and new interior layouts. The Vision concept is a luxury saloon (although styling models of both coupe and SUV variants are also on show in Geneva) which is far shorter and lower-slung than traditional rivals. That’s because, according to Aston Martin styling boss Marek Reichman, the use of electric power allows a different interior layout, maximising space while minimising size.

“The Lagonda Vision Concept is an incredibly bold design statement,” said Reichman at the geneva show. “The electrification revolution means there is no longer any need for horse and carriage design, and our new concept shows the scope of design opportunities that open up once you no longer need to provide space for a large power source directly in front of the passenger compartment. In the Lagonda Vision Concept, the batteries occupy the floor of the car. Everything above that line belongs to us.

“Lagonda has no need to occupy a huge amount of road space or make an ostentatious wealth statement. It is like comparing Concorde to the first class cabin of a conventional airliner. By ditching traditional architecture like Parthenon grilles and massive frontal areas, and by using electrical power, Lagonda design can still be distinctive and luxurious without being grandiose. It offers its customers a thoroughly modern, emission-free form of super-luxurious mobility.”

The Irishwoman looking after refugees' wellbeing in Berlin
3