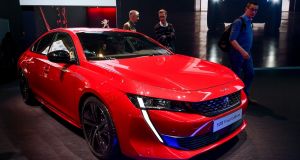 Depending on your perspective on the future of diesel, the car of the Geneva Motor Show could well be the Toyota Auris. With this latest iteration of the humble hatchback, the Japanese car giant is calling time on its production of diesel passenger cars. In years to come it may be seen as another landmark in the advent of an electric age or a huge strategic error. The jury is out.

In terms of eyecatching metal, however, Peugeot probably stole the show, even in the face of some strong premium competition and a veritable fleet of plug-in SUVs.

While everyone is fixated on SUVs and crossovers – including Peugeot itself – the French firm’s new 508 saloon is the most aggressive looking four-door saloon from a mainstream brand for some time.

Photos don’t seem to do this car justice. In the metal it has strong touches of four-door coupe styling. While that means rear entry is a little compromised, it gives the car a real appeal and is just what the saloon market desperately needs if it hopes to survive for a few more years against the SUV onslaught.

Another firm hoping there’s life left in the saloon market is Audi, which unveiled the new A6 at the show.

And in keeping with the trend at the four-ringed brand – and its German rivals to be fair – it looks very much the shrunken A8. That means you get a smart looking car, albeit one that lacks individual flair or personality. The good news is that inside it gets the same multi-screen cabin as the flagship model, along with the mild-hybrid system that backs up its petrol and diesel engines. First impressions on the stand at least, suggest it will be a serious contender against its arch-rivals, the Mercedes E-Class and BMW 5 Series.

And no sooner have we talked up saloons then we are back with SUVs. Audi is also showing off its E-Tron Quattro prototype at the show, a preview of the first all-electric production car from the brand. Currently undergoing final testing, the finished car, sized roughly between the current Q5 and Q7, is planned to be on the market for 2019 sales. Designed around a 150kw battery that’s reportedly capable of a range of up to 500km, the firm claims it can be recharged at fast-charging points in just 30 minutes.

Over at Lexus the focus was on the world debut of the new UX, a stylish hybrid crossover aiming to take on the likes of the award-winning Volvo XC40 and BMW X1. Sharing a platform with Toyota’s C-HR, its styling is certainly not clean and simple, but it’s nonetheless smart.

Billed as an SUV, but in the metal more of a beefed-up big hatchback, Jaguar has also the production version of the much-hyped I-Pace electric car. Claiming a 500km range – which is fast becoming the benchmark for upcoming electric cars – the big talking point for the crucial US market is that it is pitching itself at a price point below both the Tesla Model S and Model X. Let battle commence.

Hyundai is busy promoting the electric version of its new Kona at the show. Offering a claimed range of 470km on a single charge, the car will arrive in Ireland later this year – the Irish distributor is hoping in time for 182 registrations in July – but the most eyecatching car on the Korean’s stand is the new Santa Fe.

Also due in the Republic later this year, it’s a fully-fledged seven-seater but with the styling and interior finish to cause serious concern amongst rivals at Peugeot, Skoda and even the likes of Audi and BMW.

The Santa Fe has always been regarded by Irish buyers as more premium than the rest of the Hyundai range, comfortable in the leafy suburbs alongside more prestigious brands. Now it seems to have the look and finish to justify that viewpoint.

Staying in the leafy suburbs amongst the well-heeled motoring classes and BMW unveiled the stunning looking Gran Coupe version of its new 8 Series. In concept form for now, both 8 Series and 8 Series Gran Coupe will get a full spectrum of engines, including a basic six-cylinder turbo model, a plugin hybrid, and the 4.4-litre twin-turbo 600hp V8 from the new M5. There will also be an ultimate range-topper, using the turbocharged 6.6-litre V12 taken from the M760Li and Rolls-Royce Ghost.

Honda is also using the Geneva show to launch the new CR-V in Europe. It will be offered with optional seven seats for the first time ever, bringing the CR-V into direct competition with models such as the Skoda Kodiaq and Nissan X-Trail.

It also includes a clever new hybrid model which uses a 2.0-litre Atkinson cycle petrol engine and battery assistance. There’s a conventional 1.5-litre VTEC petrol engine too, but no mention of a diesel model, despite lobbying from the Republic for a limited production run.

And so we come back to the brand that is certain that diesel is dead. In an attempt to prove there is more to the Toyota brand than a fundamentalist approach to hybrids, it is preparing to revive its Supra sports car range and chose Geneva to show a racing car concept version of the upcoming car.

Look past the racing bodywork and the big rear wing and you start to see the new production Supra. The car is being co-developed with BMW, which will have its own variant, so we can expect a potent petrol engine, but also a hybrid courtesy of the Japanese side of the team.

The Geneva Motor Show opens to the public on March 8th and runs through to March 18th.