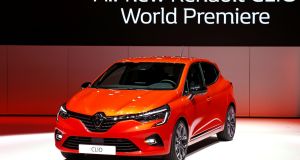 The new Renault Clio: focus is on improving its perceived quality amongst supermini buyers

Timing is everything. Just as Renault’s current bosses prepared to pull the covers off the all-important new Clio supermini at the Geneva motor show, news came through that the company’s former chairman Carlos Ghosn has been granted bail by a Japanese court.

Executives on the stand seemed uncertain how to react, but the French company has been more supportive of its former boss than alliance partner Nissan.

Ghosn, was arrested three months ago for alleged financial crimes. The architect of the Renault-Nissan tie-up, and until his arrest in November one of the global auto industry’s most feted executives, could walk free as early as Tuesday afternoon after his bail was set at 1 billion yen (€7.8 million).Bail was granted by a court on Tuesday on condition he submit to video surveillance and communications monitoring.

The news stole some of the spotlight away from the introduction of the most advanced Renault supermini in decades.

The advances are not just in terms of in-car tech, sleek design and powertrains, however. Executives are eager to get the message across that the Clio will deliver rock-solid reliability and driving fun as well.

At a pre-launch briefing earlier this year, Renault bosses showcased the new car to try and make clear just how much attention and focus has gone into the car. Dubbed “Project Genesis”, the French engineers clearly understood the outgoing Clios strengths and weaknesses. Under strengths has always been design and research indicated that one of the key reasons for buying Clios was down to its strong styling. Where the supermini was weakest was in terms of driving and perceived quality. These were the areas that needed to be addressed - and have been in the new fifth generation Clio.

Smaller, lighter yet bigger inside

It’s a view echoed by senior vice president of design Laurens van den Acker. “When I arrived at Renault, it [THE CLIO]was looking for its soul. This time, we have so much to build on it would be a shame to throw it away,” he said.

So the focus is on improving materials, particularly replacing hard interior plastics with softer materials benchmarked against rivals like the VW Polo. First impressions are that they have certainly delivered on this front, with a cabin that’s much more refined and driver focussed, with nice touches like a smaller steering wheel and an instrument cluster that’s easier to read. At higher grades the star is a new big infotainment screen in the central console, but Dubroca is keen to point out that Renault has focussed on practicality as well, so features like air-con controls and several other regularly used features are still controlled by buttons and knobs.

The new Clio may be 14mm shorter than before and 30mm lower to the ground, but the interior cabin space is actually larger, a big victory for the engineers. Part of this is down to the use of thinner seats to increase legroom by 26mm and bootspace is claimed to be class leading at up to 391 litres. Another win is with the weight, down 22kgs on equivalent predecessors.

The car will debut this autumn with a 1-litre 75bhp petrol as well as a turbocharged version in 99bhp or 120bhp. A 1.5-litre diesel will follow soon with either 84bhp or 114bhp. By 2020 a hybrid will be introduced to the range as well, matching a 89bhp petrol engine with a 40bhp electric motor and 1.2kWh battery. Dubbed E-tech it will be the first hybrid in its supermini range.

The expanded electric range will continue with a plug-in hybrid version of the Captur SUV, supported by a 9.8kWh battery which the company says will offer a full electric range of up to 50km before reverting to regular hybrid mode.