Volvo to limit car speeds in bid for zero deaths 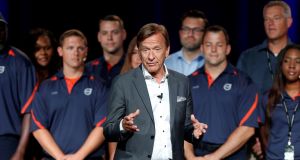 Volvo Cars said on Monday it would introduce a 180km/h (112mph) speed limiter on all new vehicles from next year as the Swedish automaker seeks to burnish its safety credentials and meet a pledge to eliminate passenger fatalities by 2020.

While Volvo, whose XC90 flagship SUV currently has a top speed of 212km/h, has made progress on its so-called Vision 2020 target of zero deaths or serious injuries, chief executive Hakan Samuelsson said it was unlikely to meet the goal without additional measures to address driver behaviour.

“We’ve realised that to close the gap we have to focus more on the human factors,” Mr Samuelsson told Reuters.

Volvo did not elaborate on the data, but said its passenger fatalities were already well below the industry average before the goal was announced in 2007.

In addition to the speed cap Volvo plans to deploy technology using cameras that monitor the driver’s state and attentiveness to prevent people driving while distracted or intoxicated, two other big factors in accidents, Mr Samuelsson said.

The company is also looking at lower geo-fenced speed limits to slow cars around sensitive pedestrian areas such as schools, while seeking to “start a conversation” among automakers and regulators about how technology can be used to improve safety.

Volvo, which is owned by China’s Geely, announced the new speed limitation policy on the eve of the Geneva auto show, where its new Polestar performance electric car brand is showcasing its second model, the Polestar 2.

While Volvo buyers often choose the brand for its safety, Mr Samuelsson conceded that the speed cap could be a turn-off for a few in markets such as Germany, where drivers routinely travel at 200km/h or more on unrestricted autobahns.

“We cannot please everybody, but we think we will attract new customers,” the CEO said, recalling that the rollout of three-point seat belts pioneered by Volvo in 1959 had initially been criticised by some as intrusive. “I think Volvo customers in Germany will appreciate that we’re doing something about safety.” – Reuters