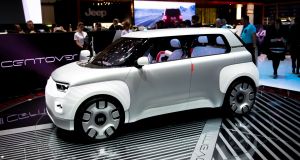 Fiat's Centoventi concept. It’s a 120th birthday present to itself (Centoventi…) and is, in is simplest form, a concept version of the next-generation Panda

Jaguar’s nailbiting victory in the European Car of the Year 2019 awards, announced on the eve of the Geneva Motor Show, turned out to be an apt metaphor for a show where uncertainty and electricity were the dominant themes.

The all-electric crossover saw off competition from a traditional old-fashioned petrolhead sports coupe to take the coveted prize, but only after a second count. It was old against new, the electric future competing against the petrolhead past, and it went right down the wire, with the Jaguar seeing off a challenge from Renault’s Alpine A110 sports coupe by 18 votes to 16 in the second count.

When the show opened its doors to the world’s media on Tuesday morning, that victory for electric seemed to be on message with the models on show. Every stand was surging with electric charge and it was hard to find any new four-wheeled metal that didn’t come with a plug, or least promise a flavour of electric power courtesy of a hybrid powertrain.

However, the more mainstream brands such as Peugeot, Audi, and Kia boasted that their motor show stands were 100 per cent electrified, with only electric or plugin hybrid models on show. While a half-decent lawyer might be able to unpick one or two of those claims, the sentiment was clear – motoring is going all-electric.

Audi showed off nothing but electric cars (the Q4, a sportier version of the e-tron quattro, and plugin hybrid versions of the A6, A7, A8 and Q5). The all-electric Q4 will land in Irish showrooms in late 2020, but the plugin hybrids will start to show here in the coming months.

With a fully electric version of the X3 coming to market next year, the mid-sized crossover will be available in all formats, from petrol or diesel to plugin hybrid or full electric.

Yet for every plugin hybrid that’s going to arrive in the next 12 months, there seemed to be three fully-electric concepts that are promised by 2021. The electric onslaught still seems to be just down the road, but not here yet.

That’s partly down to the long lead times in the automotive world, along with a general uncertainty about whether to go to market with the latest batteries promising ranges of 400km on a single charge, or wait in hope of better range in the coming years.

Not everyone is buying the lead time claims either. Environmental lobbying group Transport & Environment will publish a report on Wednesday claiming that car-makers are holding back on expanding their electric vehicle fleets so as to take fullest advantage of so-called “super credits” which allow them to claw back EU fines for making higher emissions models.

Such a rebuke will no doubt sting the industry on the opening week of the show, and that won’t be helped by another report, this time from JATO Dynamics in London, which points out that as Europe’s car-buyers steadily turn away from diesel, average carbon emissions are rising. JATO Dynamics, a London-based car industry analyst, has warned that average European car CO2 emissions hit 120.5g/km in 2018 – the highest figure since 2014. Almost all of that rise is being blamed on the reduction in demand for diesel power. Across the Continent, diesel sales fell by 18 per cent in 2018, and JATO is correlating that figure directly with the 2.4g/km increase in average CO2 emissions.

If electric power was the theme on every stand, EU geopolitical affairs featured in every conversation around the cars. Brexit concerns dominated for some, with strong warnings from executives at BMW and Toyota – both with substantial manufacturing operations in the UK – that the ongoing uncertainty is bad for business. Both companies have already warned that a hard Brexit would cast doubt over future investments in UK production.

On a wider global scale, there are also concerns over threats by US president Donald Trump to impose import tariffs on EU cars. All these geopolitical concerns are understandably feeding an overall sense of uncertainty amongst industry executives tasked with signing off multibillion-euro investments in future markets and models.

It’s also feeding uncertainty amongst consumers, who are already unsure of what type of power option to choose for their new car. Is there life left in diesel, or will they be punished by future punitive taxes? What about petrol? Or hybrid? Or can they really live with an all-electric car? And if they do go down the electric route, will the pace of battery advances make their new car obsolete by the time they go to trade it in? No wonder so many are opting to sit on their hands and wait.

Of the handful of “traditional” powertrain models on display, it was a duo of new superminis that caught the eye. Peugeot’s new 208 looked uncommonly handsome (very Audi-esque in its styling), boasting an interior that reflects the company’s critically acclaimed i-Cockpit instrument cluster. And even here there is an all-electric version on display, with the promise of 300km range from the e208 version.

Over at Renault, the new Clio supermini carries the clean styling cues of the goodlooking Megane with a much-improved cabin, and promises that it will deliver a quality of ride and handling that surpasses the previous four generations of the car. And yes, it will come with a hybrid version.

But the battle for the best-looking car at the show was not between these production superminis: it is a fight between two Italians – sister brands Alfa Romeo and Fiat.

The Alfa Romeo Tonale was a secret until showday. It is a small SUV that packs a 240hp plugin hybrid powertrain, and promises to do what the Germans still haven’t been able to: make a small crossover look sexy.

Alfa’s owners at Fiat, meanwhile, invoked the spirit of the original Panda for its Centoventi concept – an all-electric city car with a modular interior (you can take out the front passenger seat and replace it with a cargo box or a built-in child safety seat) and a battery pack that can be expanded to add extra range, even after the car has been bought.

Fiat invoked the printer-and-ink financial model of selling an affordable car and then keeping money rolling in by allowing owners to constantly buy, and resell, options and extra batteries, but while there was much talk on millennial obsessions with new ownership models, hopefully the production model that springs from the Centoventi will be rather more sensible.

Speaking of sensible, there seems to be a reduced emphasis on autonomous or robotic driving at this year’s show. The furthest ambition that most would talk about was “Level 3” autonomy, which is about where we are now. Carlos Tavares, the head of the Groupe PSA and its multitude of car-making brands – Peugeot, Citroen, DS, Opel, and Vauxhall – said that fully autonomous cars may never make a mass-market breakthrough, because the technology will be too expensive for retail buyers. Tavares made his comments during a press conference where PSA revealed record car-making financial results, which included the first profit for more than two decades for Opel and Vauxhall.

Fully autonomous tech, which would allow cars to drive themselves, will remain the preserve of “those who could anyway afford to employ a driver”, said Tavares. He said that PSA would continue to work on advanced driver aids, up to Level 3 (where the car can steer and brake itself on some roads but still requires the driver to pay attention and take control of the vehicle at regular intervals).

Which brings us rather neatly around to one of the most charming new car launches at Geneva – the Morgan Plus Six. A replacement for the old V8-engined Plus 8, the Plus Six switches to the 335hp turbo straight-six engine currently used by both BMW and Toyota. So, with its part-wooden chassis, and veneered interior, you really can think of this 1,075kg flyweight as a genuine mock-Tudor Supra. As an antidote to all the unfulfilled electric promises being made, it’s kind of hard to beat.