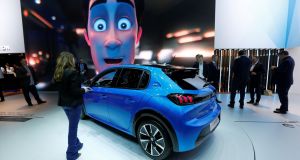 Peugeot, which recently announced record 2018 financial results, is celebrating at the Geneva motor show by giving debuts to its new 208 supermini and the 400hp 508 plugin hybrid sports saloon.

As with other car makers at Geneva, Peugeot claims that its stand is 100 per cent electrified, but that’s a bit of a cheat, as the most important car on the stand — the new 208 — only has one electric version, and will also be available with conventional petrol and even diesel power.

That electric version shares its 50kWh battery, 300km one-charge range, and 136hp electric motor with the forthcoming DS 3 Crossback, and it’s the first all-electric Peugeot since the slow-selling iOn.

Peugeot says that, because electric power was designed into the 208 from the get-go, there’s no compromise in terms of cabin nor boot space, and that some 30kg was saved from the chassis in order to be able to help cope with the extra weight of the batteries.

Conventional power comes from 75hp, 100hp, and 130hp versions of the existing 1.2-litre ‘PureTech’ three-cylinder petrol engines, and a single 100hp version of its 1.5-litre BlueHDI diesel engine, which most likely won’t be available in Ireland.

The new 208 is a sharp-looking car, with more than a hint of Audi in its styling, and it gets much more aggressive styling attitude than that of the current model. The new 208 gets a front end treatment that owes an obvious debt to the 508 saloon, with narrow headlamps and the distinctive LED ‘blades’ that cut down into the front bumper.

The cabin, too, looks as if it takes a lot from the 508, not least that car’s impressive levels of quality. The 208 continues the current Peugeot trend of having a small, hexagonal steering wheel that sits almost in your lap, with high-set digital instruments. This time around there is also an equally high-set central touchscreen, and the same piano-style ‘hot keys’ below the screen that give you short-cut access to the main menu options.

Meanwhile the 508 ‘Peugeot Sport Engineered’ concept takes the basic mechanical package of the upcoming plugin hybrid version of Peugeot’s sleek fastback saloon (1.6-litre turbo petrol engine combined with plugin batteries and two electric motors) and adds a bigger kick of power to the system. Combined output from the petrol engine and electric motor is now a whopping 500hp, with 700Nm of torque, giving the 508 BMW M3-levels of performance. 0-100km/h is hit, from standstill, in just 4.0secs. Despite that, the combined Co2 figure is just 46g/km, and on electric power only (which you should be able to stick to for around 40km) you can still hit 100km/h in a pretty brisk 8.0secs.

The 508’s exterior has been updated with a sharper aerodynamic package and 20-inch alloy wheels, while the cabin gets high-backed sports seats with Alcantara suede trim.

If a 500hp Peugeot saloon isn’t exciting enough for you, how about a V6 hybrid Aston Martin to rival the McLaren 720S and Ferrari T8 Tirbuto? That’s exactly the car that Aston Martin has announced at Geneva, called the Vanquish, and boasting a new mid-engined chassis and a V6 engine that Aston says will be designed and built in-house, not bought in from Mercedes (which has a five per cent shareholding in Aston). The new engine, expected to be a 3.0-litre unit, will be mated with a hybrid system derived from that used Aston’s 1,100hp Valkyrie hypercar, and should give it exceptional performance, with a sub-3.0sec 0-100km/h time.

Although the Vanquish also lifts styling cues and chassis tech from the F1-based Valkyrie (Red Bull’s chief designer Adrian Newey designed the Valkyrie’s suspension and aerodynamic packages) it’s been designed to be usable and comfortable for everyday driving.

Also using the Vanquish’s twin-turbo V6 and hybrid system will be the AM-RB 003, a spinoff from the Valkyrie programme and again partnering with the Red Bull Formula One team. Although less expensive than the Valkyrie (it’ll still cost a hefty €1-million before tax, all the same) the 003 is expected to have a 1,000hp+ output and serious performance on track. It may also form the basis of an Aston Martin assault on an outright victory at the Le Mans 24hrs, depending on how the new ‘supercar’ rules package works out.

Finally for Geneva, Aston Martin has brought along its all-electric, luxury Lagonda All-Terrain concept. Spun off from Aston Martin’s own upcoming DBX SUV, the Lagonda sees long-heralded revival of the classic marque, with nods to the past and an eye on the market established by the Bentley Bentayga and Rolls-Royce Cullinan. “We imagined that the owner would be a sort of pioneering yet environmentally conscious person’ said Aston Martin head of design, Marek Reichman. “They may well have a luxury villa in a remote place that acts as their sanctuary. As such, the Lagonda brand is unconstrained by the traditional values of current luxury products, it is not about wood and leather, we tried to design the interior to feel very calm and quiet with soft, natural materials like Cashmere. Lagonda reflects a future that is full of unique materials that are not set in the past.”

Why such a model blitz from the normally slow-and-steady Aston Martin? Doubtless because investors have become concerned that the company’s share price has plunged so far from its launch value last year, in spite of record sales in 2018.