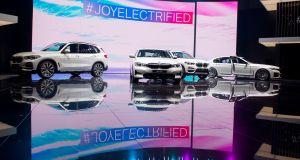 A senior BMW executive has warned that attempts to delay or extend the timeline for decisions on Brexit will only add to the uncertainty that is already hurting businesses.

BMW Group employs around 8,000 people directly in the UK with an additional 14,000 in its 147-strong Retailer network representing BMW and MINI brands. The company has invested nearly £2 billion (€2.3 billion) in its UK operations since 2000, and the UK is the company’s fourth largest sales market in the world.

Pieter Nota, chief marketing officer and member of the board at BMW said: “Delays don’t end the uncertainty so we want and end to this period of uncertainty. Delaying the difficult decisions will not help.”

“What we really need and what we want is an end to this period of uncertainty. We would call out to officials and politicians to end this current uncertainty because it’s bad for business.

Asked if Brexit threatens the current jobs or future investments in the UK, Mr Nota said: “We are very committed to the UK, it’s the home of two of our group brands - Mini and Rolls Royce - and we have significant production facilities in the UK.

“We are certainly committed to there. We are also investing there, but what we need is an end to this period of uncertainty and a freeflow of goods. If you look only at the logistic streams across the Channel - both products and parts - it’s very significant and we don’t want any disruption there; it’s not good for business,” he told The Irish Times.

The premium car giant has warned that border delays which disrupt its supply chain will put UK production under threat. About 90 per cent of the parts used in BMW’s UK plants come from mainland Europe. The Oxford plant, which produces 60 per cent of the 378,000 Minis it builds every year, operates on a just-in-time delivery system, and 150 trucks delivering parts each day to the plant. BMW said in September it was moving the annual maintenance shutdown for its Mini plant to April in case of disruption caused by Brexit.

Britain’s car industry, which employs around 850,000 people and is largely owned by foreign manufacturers, has been rushing through plans to cope with the potential disruption of a no-deal Brexit, such as building up inventories and in some cases organising plant closures around Brexit day. However, UK Prime Minister Theresa May said last week that if UK lawmakers once again rejected her Brexit deal, she would offer them a series of votes that could lead her to ask Brussels for a delay.

Concerns over Brexit are compounded by threats of US tariffs on EU vehicle imports currently being considered by President Donald Trump. The US is BMW’s second biggest market, with sales last year of 354,698. It was the only established premium manufacturer to record sales growth in the US market in 2018.

BMW’s plant in Spartanburg, South Carolina is the company’s biggest volume production facility in its global network, responsible for building its X range of crossovers and SUVs. However, many of the parts - including engines - are imported from Europe.

According to Mr Nota: “Spartanburg directly and indirectly employs over 70,000 people, so we are a big employer in the US and the good news there is that a lot of cars are exported out of the US into Europe and China, for example, so it’s actually a good thing for US employees that BMW has invested there over the years.”

“What is interesting is that I believe - and there have been voices around - that the US automotive industry doesn’t want those proposed tariffs. And needless to say at BMW we are very much in favour of free trade. That is in fact what has enabled and secured those jobs created in the US, for the US, so we would always say we are in favour of frictionless trade.”

Mr Nota was speaking at the Geneva motor show, where BMW unveiled its expanded range of electric cars and plug-in hybrids.

The new electrified cars from BMW at the show include a plug-in version of the X3, the 3 Series and the X5.

There are electrified versions of the 7-Series and the even the 5-Series and the 2-Series as BMW gets serious about tackling both the path to EVs and its own CO2 average figures.

With a fully electric version of the X3 coming to market next year, it means the mid-sized crossover will be available in all formats, from petrol or diesel to plug-in hybrid or full electric.

1 Will your boss let you work long-term from home – or from abroad?
2 Plans for €2bn Dart expansion lure Bombardier to Dublin
3 Virgin Media unveils new entertainment platform
4 Revolut shifts regulation of Irish customers to Lithuania
5 Only half the homes needed this year will be built, construction event told
6 McGuinness faces Brexit and Covid grilling at parliamentary hearing
7 Subway bread too sweet for the Irish tax authorities
8 Not just another brick in the wall
9 AA Ireland bought by Olivier Sarkozy-led fund for more than €240m
10 Google tells workers to return to country where they are employed
Real news has value SUBSCRIBE