A spacious family EV for under €30k sounds tempting, but there are drawbacks to consider 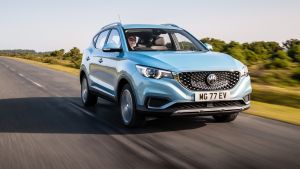 The MG ZS EV is the first mass market Chinese-built car to go on sale in Ireland. Expect a lot more to follow

At the value end of the electric car market, there’s an increasing sense that you buy a battery and get a car thrown in for free.

It’s an aphorism that’s evident in the latest reincarnation of MG.

There is no point harking back to the brand’s sports car heritage; besides when the badge last featured in Irish showrooms it adorned a range of outdated family saloons and hatchbacks.

Several years of turmoil and more than a few false starts sees it return here as an all-electric discount brand flying the Chinese flag, eager to carry the masses into the new electric age. Two models are on offer here initially: the all-electric ZS crossover and the HS plug-in hybrid.

In styling terms, the ZS bears a striking resemblance to earlier generations of Hyundai’s Tucson and offers similar interior space. If imitation is the sincerest form of flattery, the designers at the Korean brand, along with Mercedes and Audi, should be blushing with pride. But it’s hardly fair to criticise the similarities of a car with others, particularly if that styling proved popular.

At its heart is a 44.5kWh lithium-ion battery pack with a claimed range of 263km, though in reality that’s  200km or so.

During our time with the car, driving in urban areas we were getting close to 22kWh/100km (which suggests about 200km in range). However, when we mixed in a little rural and motorway driving during a total of 125km,  it came in at 26.4kWh/100km, which equates to closer to 160km from a full charge.

For an extra €3,000 you get a package of added safety features including blind-spot detection, then a few aesthtic features like roof rails, leather-style upholstery, heated front seats, and a panoramic. Add ¤700 for metallic paint or €900 for a Tri-coat paint finish.

Buyers may well be tempted to throw on the extra equipment, particularly the safety pack, but given the sort of depreciation on  discount cars – and electric ones – price-conscious buyers will get most value by opting for the decently equipped entry grade and leaving it at that.

What you get is a relatively spacious family car that takes you into the electric age for under €30,000. It also has one of the biggest boots of an EV for this sort of money, if that really matters.

Tempting? Perhaps, on paper, but there are a few things to consider.

For a start, there are some strange corners cut along the way, little things that can annoy. The speed dial in the initial models landing in Ireland are all predominately in mph and the km/h reading is mostly unreadable while driving. You can set up a digital km/h speed reading so that’s partly resolved, and we are promised that cars landing towards the end of the year will have km/h dials.

Then there are the optional heated seats on the €3,000 Exclusive pack, which have just two settings: pants on fire or off. You do, however, get a decent touchscreen system with intuitive controls (are you paying attention, VW?).

On the road, the ZS is soft and pliant, set up for a comfortable ride. That’s fine for city driving, though it does tend to bottom out the suspension on harder speed bumps and potholes. Meanwhile, there’s bodyroll in bends while the steering is very light, forcing you to be regularly adjusting the line on motorway driving.

But those issues aside, you are still getting a lot of metal for marginal money, when you consider that expensive lump of battery under your feet. And there’s a decent nod towards modern tech and touchscreens, so you don’t feel you’ve sacrificed on that front in the name of value.

Overall, we were starting to be won over by the MG, a no-frills entry point for many families into the world of electric. And then on the final day as I prepared to leave it back, the ZS wouldn’t start. A large alert on the dash told me there was a “Vehicle Control System Fault” and then that the “HV Battery Shut Off”.

There was still supposedly 137km of range left in the battery pack, while the regular battery dial showed it still had a 12V charge. But the car wouldn’t budge. A few phone calls later, the advice was to try to give it a jump start. So thankfully having jump leads to hand, we hooked it up to our family car and the MG returned to life.

It was an unfortunate end to my time with the MG, and one that resurrected bad memories of tales of woe from the brand’s past, even if the current Chinese cars have as much familial links to their British namesakes as Xi Jinping has to Nigel Farage.

Setting aside our need for jump leads (always a good buy at €30 or so), the case for buying the MG as a bargain car is not clear cut. Yes, it’s coming in at under €30,000 and, yes, it has family practicality and space. But there are several electric rivals within €3,000 to €4,000 of the ZS Exclusive that offer a lot more class and driving fun.

And this market for more affordable electric cars is expanding.

For example, even VW – far from a discount brand – will be launching a new entry level version of its all-electric ID.3 later this year, with prices likely to start circa €28,000. It will be powered by a 45kWh battery pack and claim a range of 330km. It doesn’t take a car finance guru to predict this VW will also hold its value much better than the MG when it comes time for resale.

Other circa €30,000 electric offerings will follow, including a smaller city crossover from Dacia this year. I’m not convinced there will be major benefits to being a bargain-priced early adopter at this stage of the electric race.

So kudos for delivering an affordable electric car for the masses, with decent range and in a crossover format that’s the current craze among buyers. Where this car is a real pioneer is in its country of origin: this is the first mass market Chinese-built car to go on sale in Ireland. Expect a lot more to follow.

So to our rating, and the MG was about to get over the line to three stars for delivering on price and functionality, but we can’t quite score it higher than two. It did leave us having to reach for the jump leads after all.