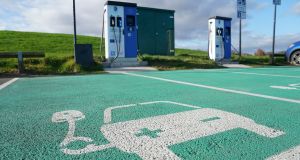 Figures on car sales from the start of this year indicate a significant shift under way towards the purchase of electric vehicles, plug-in hybrids and self-charging hybrids.

The data shows registrations of vehicles in the lower CO2 bands significantly outperformed the market for the first time.

The trend is evident from new passenger cars registered in January classified on the basis of their emissions – the first month under a new vehicle registration tax (VRT) regime announced in the budget.

The data provided by Revenue and the Society of the Irish Motor Industry “show, unequivocally, that Government aims have been met with an immediate and very significant shift in the purchasing pattern of new cars towards vehicles with lower emissions”, said Mark Teevan, Toyota Ireland’s director of strategy, innovation and corporate affairs.

The new system was designed to “strengthen the environmental rationale in the VRT regime” and encourage car owners to opt for greener and lower-emitting vehicles.

The lowest four bands (out of 12), which also include battery electric cars, represented 62 per cent of the market, compared with 49 per cent in January 2020.

The middle four bands accounted for 37 per cent of the market, down from 50 per cent. The overall passenger car market was 18 per cent down year-on-year in January to 25,159 unit sales, which has been largely attributed to the post-Christmas introduction of Level 5 Covid restrictions.

“There is a marked 13 per cent swing from the middle bands into the lower bands. This is a very fast response to a policy-driven tax change that did not require any additional stimulus to be spent by the State,” Mr Teevan said.

“Consumers continue to vote with their wallets, and this time around that happens to coincide with doing the right thing for the environment. Government now need to look at further measures to increase the attractiveness of lower-emitting vehicles to Irish consumers, while continuing to disincentivise higher-emitting vehicles.”

Ireland has moved to the Worldwide Harmonised Light Vehicle Test Procedure system, known as WLTP, a UN-developed VRT-based system for measuring vehicle emissions with 20 brands. The January figures are based on the old New European Driving Cycle (NEDC) system used until this year, which allows a prior year comparison. But future data will be based on WLTP.

The last time major VRT changes were introduced was in 2008. Based on engine size, it had unintended consequences and prompted huge growth in diesel cars in spite of their CO2 outputs – with Ireland soon having the largest share in Europe of these type of vehicles.

On Monday, the Sustainable Energy Authority of Ireland defended the operation of its incentive scheme for the purchase of EVs amid claims it was disproportionately benefiting wealthier buyers.

Declan Meally, head of emerging sectors with the authority, said that of about 6,000 cars sold under the scheme last year, about 5-10 per cent were priced over €100,000.

Mr Meally said that the grants and tax rebates under the scheme followed the car, rather than the owner, and that it was possible to buy a second-hand EV for less than €10,000.

The SEAI was “reviewing [the scheme] all the time”, he told RTÉ Radio’s Drivetime.

Calling for changes to the scheme, Sinn Féin TD Darren O’Rourke said it “should be about making an EV a real option for people, not about paying for optional extras at the luxury end of the scale”.

Mr Teevan said the Government had been unfairly ridiculed for its plan to have a million EVs on Irish roads by 2030, but this trend indicated “we are closer to an inflection point” and “that change is here to stay”.

Mr Teevan said, however, there were still challenges, including a need to build social acceptance and enhance charging infrastructure.

The last time major VRT changes were introduced was in 2008. These were based on engine size, and had unintended consequences by prompting huge growth in diesel cars despite their CO2 outputs.