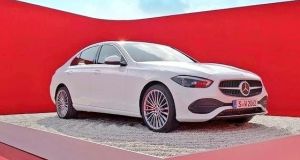 We’re just a day from the full and official reveal of the new Mercedes-Benz C-Class saloon, but the internet has worked its wily magic and winkled out some images of the new Merc before the factory was ready for us to see them.

Revealed on Twitter and Facebook feeds, the new C-Class looks broadly similar to the outgoing model in exterior but the big news is the interior.

Inside, the new C-Class marks a radical departure from the previous model, which even when it had (optional) digital instruments, housed them in analogue-style pods. This time around the C-Class gets an ‘all-glass’ cockpit with the latest generation of the MBUX digital instrument and infotainment panels. In the centre, there’s a vast tablet-style screen that leans back towards the base of the windscreen.

That’s a design lifted almost wholesale from the new S-Class, and should add a serious touch of class (of course…) to the C’s cabin. The screen that houses the instrument display is also larger than before, and we would expect to see more customisation and personalisation options. The steering wheel also gets the new touch-sensitive multi-mode buttons as the E-Class and S-Class. There’s also a large heads-up display.

On the outside, the front is also taking its cue from the S-Class, but at the rear takes on a swoopier design that looks very similar to that essayed by the CLA four-door coupe.

While we wait to hear full technical details of the new C-Class (code-named the W206 within Mercedes) we do know that it will follow on from its predecessor in having an entirely electrified engine lineup - two plugin-hybrids (one petrol, one diesel) will be available, and all engines will have at least a 48-volt mild-hybrid system to help save fuel and emissions around town, and when coasting on the motorway.

There will also be a third plugin-hybrid version, as the mighty C63 AMG high-performance model ditches its traditional V8 engine and instead goes for a combination of a highly-tuned four-cylinder turbo petrol unit, backed up by a big battery and a powerful electric motor.

The C-Class will also borrow some of the S-Class’ high-tech driver aids, including a new lane-keeping and active cruise control system that, in theory, will allow drivers to drive ‘hands-off’ for longer than the usual few seconds offered by current systems. Mercedes has also developed, with Bosch, a remote parking system. Controlled by a smartphone app, this will in theory allow a C-Class to drop you at your destination and then head off by itself to find a parking space - assuming that legislation will allow it to.

With this new C-Class, there are going to be three four-door offerings from Mercedes within the same sort of market space, in and around the same size, and not all that dramatically different on price - the C-Class, the A-Class Saloon, and the CLA. Saloon market saturation?

Well, perhaps that’s what Mercedes is trying to do. Although the German car making giant out-sold BMW-badged cars in 2020, overall the BMW Group (counting Mini and Rolls-Royce sales as well) out-did Daimler-Benz to take the top global luxury spot overall. Daimler chief executive Ola Källenius will not want to take that lying down, and the new C-Class will be key to Mercedes’ ambitions to retake the global luxury top-spot.