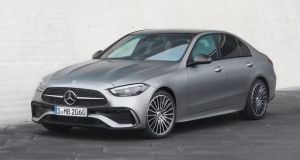 Mercedes has also developed, with Bosch, a remote parking system that will in theory allow a C-Class to drop you at your destination and then head off by itself to find a parking space

Shrunken E-Class or scaled-up A-Class saloon? That appears to have been the styling order of the day at Mercedes HQ when the new C-Class, which goes on sale here in September, was cooked up.

While it might be thought that the world has gone SUV-crazy, the fact is that with this new C-Class, alongside the E-Class, A-Class salon, and CLA four-door coupe, Mercedes now offers four four-door saloons that are visually very similar, and not a million miles apart in terms of price, either.

Where the C-Class leapfrogs ahead is in its cabin. Whereas we’ve become familiar with the insides of the A, CLA, and E - with their ‘digital plank’ MBUX electronic dashboards - the C takes inspiration from the just-launched S-Class, and gets an entirely new flavour of Mercedes interior design.

Once again, it’s a design dominated by screens, but quite apart from the free-standing digital instrument panel in front of the driver (the previous C-Class placed its digital screens in traditional round instrument binnacles) there’s the matter of the reclining iPad in the middle of the dash.

That touchscreen features the latest MBUX operating software (including the jaunty ‘Hey, Mercedes’ digital voice assistant) and can be customised both in terms of layout, and with the same Discreet, Sporty, and Classic colour schemes as the main instruments.

Both saloon and estate C-Class (this is the W206 model for those of you anorak-y enough to collect Mercedes model codes) are, according to Stuttgart, ‘considerably larger’ than before, which is presumably to give the C a little breathing space above the A-Class and CLA, both in terms of price and physical size.

There’s more elbow-room all-round, and more knee-room in the back seats thanks to a wheelbase that’s 25mm longer than before. There’s also a bigger boot - expanding to 1,510-litres if you fold down the back seats of the estate version. Impressively, in spite of being bigger, the C-Class has the same aerodynamic performance as its predecessor, so it’s slippery at high speeds on motorways.

When it goes on sale in Ireland in September, the C-Class will initially be offered with a choice of eight engines, all combined with a standard-fit 9G-Tronic automatic gearbox. Five of the engines will be petrol-fuelled, and three will burn diesel. All are four-cylinder engines with turbochargers.

There’s an entry-level C180 petrol (actually a 1.5-litre engine, with 250Nm of torque), followed by a C200 version of the same engine, which can be optionally had with four-wheel drive. The top-spec petrol for now will be a 2.0-litre C300, which can also be had with 4MATIC all-wheel drive. For diesel customers, there’s a 2.0-litre in C200d and C220d forms, and a range-topping C300d. Other variants will follow, including plugin-hybrid petrol and diesel models with an electric-only range of up to 100km.

For now, it seems as if Mercedes Ireland is expecting its customers to stick with tradition, and go for the C180 and C200d for the most part. Comparing it to its predecessor, Ciaran Allen, sales manager for Mercedes-Benz passenger cars in Ireland, said: “in all but name, the new C-Class is pure S-Class in so many respects. Coming immediately behind the flagship model, it raises the bar beyond what owners might have expected from a first-tier offering in the luxury segment. In that regard, it sets a new benchmark for Mercedes-Benz itself and others.”

Allen will not talk about Irish prices until nearer the on-sale date, but given that the current, most basic, C-Class retails for €41,230, it’s already considerably more expensive than the A-Class saloon and CLA, so Mercedes will not have much wiggle room for price increases.

Unsurprisingly, the C-Class will be a bit of a tech-fest, borrowing items from the S-Class such as optional four-wheel steering, air suspension, and a new stack of safety equipment that will help keep you straight in your lane, a safe distance from the car in front, and yell with alarm if it detects you dozing off.

The range will be topped, later next year, by a new high-performance C63 AMG model which will ditch the venerated V8 engine of its predecessor, and instead will use a highly-tuned four-cylinder turbo (shared with the hot A-Class A45 AMG) combined with a plugin-hybrid electric powertrain.

The C-Class is a staggeringly important car for Mercedes-Benz. Since the model was first introduced in 1993 (replacing the now-classic 190E) more than 11-million have been sold, worldwide.

Although the German car making giant out-sold BMW-badged cars in 2020, overall the BMW Group (counting Mini and Rolls-Royce sales as well) out-did Daimler-Benz to take the top global luxury spot overall. Daimler chief executive Ola Källenius will not want to take that lying down, and the new C-Class will be key to Mercedes’ ambitions to retake the global luxury top-spot.