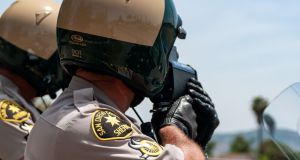 An American hacker has ended up with more than $12,000 (€10,700) in speeding tickets after setting out to test the cybersecurity of car licence plates.

The computer researcher, known as Droogie, registered a custom number plate with the California department of motor vehicles that read “NULL”, the code used in many database systems to represent an empty entry. The hacker had hoped police computers would then register any speeding-ticket data as incomplete and the fines as unpursuable.

“I was, like, ‘I’m the sh*t,’” he told the DefCon cybersecurity conference, in Las Vegas. “‘I’m gonna be invisible.’ Instead I got all the tickets.”

After he received an initial parking ticket – so much for being invisible – a database of outstanding fines linked his NULL registration plate with his address; the system then sent him every other ticket for which no valid licence plate could be found – adding up to $12,049, or almost €10,800, in other people’s fines.

The Los Angeles police department eventually scrapped the tickets and advised Droogie to change his plates – but he refused, and says he is still receiving new NULL tickets. – Guardian

Why is it so hard to find an allotment in Ireland?
8