Should Ireland swap sides after Brexit?

Could we open up our motor market, and cure the import ills, by changing to the right side of the road? 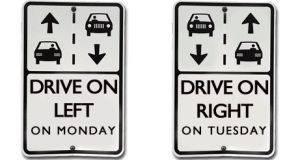 Back when Brexit was first mooted (ah, remember those halcyon days?) I wrote a piece which suggested that one of the many, unconsidered, consequences of the UK leaving the EU would be a reduction in the choice of cars on the market here.

It was a pretty obvious riff on the Brexit predictions - car companies which predominantly service left-hand drive markets will be less willing to invest in right-hand drive models if they’re not able to count on UK sales. If the UK doesn’t get some models, neither will Ireland.

I hate to be all ‘I told you so…’ about this, but it’s kinda coming true. While some manufacturers, especially the premium German brands, take great pride in offering even the most expensive and obscure models for sale in Ireland (have you seen a Mercedes S65 AMG lately? Nope, me neither, but it’s there on the price list) many others are already starting to trim their model ranges.

The departure of the Ford Edge SUV is motivated more by general apathy to the model across Europe than to Brexit specifically, but there are others. Renault, faced with falling sales of its larger models in the UK, axed right-hand drive production of the Espace and Laguna, and still hasn’t brought the handsome and hugely comfortable Talisman to these shores, or to the UK.

Again, these moves actually came before Brexit, but they’re a taste of what’s to come. If UK sales for a model or a range dip, or are removed from the board completely, then we’ll lose that car too. With Brexit still ever-looming, and tax changes also vexing the motor trade, many others are talking of restricting or constricting the sales of some models, so one way or another we’re likely to see less choice on forecourts in the coming years.

Perhaps this is something about which we shouldn’t worry, right? I mean, it’s not that big a deal if people can’t buy a particular car or not. Anyway, we all mostly just buy the same hatchbacks and SUVs as the rest of the world, so there’s little-to-no danger of those disappearing from our shores.

Well, yes, but that’s not the point. I mean, if we’re going to live in a free-market capitalist system with all of the problems and compromises that brings (paying for healthcare and education just to name a couple of prominent examples) then surely we should at least benefit from the number one advantage of such a system? Namely, freedom of choice.

The economics of demand and supply will winnow away the number of cars from which we can choose, unless we take a dramatic decision - one that I honestly believe we should take. Change the side of the road upon which we drive.

It’s not such a crazy idea. Well, okay, it is but it’s not impossible. Let’s at least not throw anything away for a moment, eh? I mean, after all, what’s a contraflow through roadworks but a carefully controlled change of side on which to drive? The only difference with this plan is that you don’t change back again.

The Swedes did it

It has been done before. On September 3rd, 1967, on what would become known as ‘H-Day’ (a contraction of ‘Högertrafikomläggningen-Dagen’) Sweden swapped sides of the road. Rather appropriately for our torrid times, the decision was actually taken to make the move from driving on the left to driving on the right by the Swedish government against the run of public opinion. In a 1955 referendum on the subject, 83 per cent of Swedes said that they wanted to keep driving on the left. Under prime minister Tage Erlander, though, that was eventually decreed ridiculous, not least because the two countries with which Sweden shared land borders - Norway and Finland - both drove on the right.

It took four years to implement, with public education films, pamphlets, newspaper features, and advertising, backed up by psychological advice given to the government on how best to get people to switch safely. It probably helped that the Swedish national psyche is, if I may be appallingly generalist for a second, careful and risk-averse, but the Monday following the changeover (H-Day was itself a Sunday) actually saw a reduction in traffic accidents and injuries, compared to normal. Doubtless it was a case of people’s minds being more focused on their driving that day, but a reduction is still a reduction. Traffic accidents and injuries slowly rose again after that, but they only returned to the usual background level, and didn’t spike upwards as a result of the change. Incidentally, Iceland followed suit in May of 1968, so there are at least two successful instances of changing driving sides.

Could we do it? Of course we could. It would take time and money, needless to remark. There’s a bit more to it than simply sending some lads around in a van to turn all the road signs the other way around, but in principle the process is understood and technically not that complex. Like I said; it’s a contra-flow, but one that doesn’t change back afterwards.

What would be the benefit? Well, we would open ourselves up to left-hand drive vehicle production, essentially completing the process of Euro-fication of our car market that, in a sense, began when we switched from mile-rated instruments and signage to kilometres. It would allow Renault to sell the current Espace and Talisman on these shores, which I would aver could only be a good thing. Equally, we would grant easier entry to our market for some exciting Chinese brands, Geely, Nio, and Byton among them.

There are more intangible benefits. It would add, at least temporarily, a more European air to our roads, towns, and city centres. It would also send a powerful, political, post-Brexit message to our cousins in the UK.

It would also give those of us who’ve long lusted after a 1990s Lancia Delta Intergrale both a reason and excuse to import one, assuming one’s bank manager could be brought around. Speaking of imports, it would also at least temporarily fix the vexing issue of Irish buyers exploiting sterling’s post-Brexit weakness and travelling to the UK to bring home used cars. True, you could then import left-hand drive used cars from across Europe, even America, but that process would become more long-winded, and indeed expensive, and so might help to re-balance the market a little.

The downsides? Expense. Confusion. Chaos. Potential for a carnage carnival of accidents and crashes. Yet another issue to toss into the gumbo stew of angst that goes with the Northern Ireland border. You’d have to switch sides when you hit Newry and Blacklion no doubt. Or they could join us on this journey to the right side of the road. Is that going to fly with the DUP?

Admittedly it might also spell the virtual elimination of second hand value for the existing right-hand drive vehicle fleet, although one could take the long-term view that we could start re-exporting second hand stock to the UK. We could also, in some cases, potentially sequester some models until they’ve achieved classic status, and reap the financial benefits of that tantalising line in the classified advert - ‘original, Irish market right-hand drive. No time-wasters.’

Am I serious? Not really. Am I merely joking? Not entirely. It could be good for us, this switch. A final mental and physical breakaway from our post-colonial past, and an affirmation of our European future. It could be maddening and complicated, dangerous and diverting in roughly equal measure. But, hey - we’ll need something to occupy us post-Brexit and better this, surely, than worrying about intervention beef?

I’d like my left-hand drive Delta Intergrale in dark green, by the way. Just in case anyone asks.