You can now salve your 911-driving conscience for a year 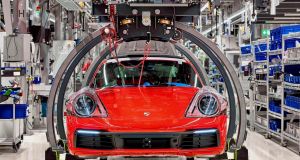 The idea of offsetting is that to compensate for the carbon emissions from your own lifestyle, you pay to have an equivalent amount of carbon reduced from another location, or to at least have enough trees planted to absorb the carbon your pricey German sports machine has emitted

As car makers, especially those that make expensive, profligate, high-performance cars, come under ever-closer scrutiny for their part in climate change, Porsche is offering its customers the chance to offset their annual carbon emissions.

For as little as €49 ($59 actually - the plan is only available in the US market for the moment) you can take the estimated 4.6-tonnes of carbon that come out of the back of your Cayenne, assuming 16,000km at an average of 21mpg, and have it offset.

The idea of offsetting is, of course, that to compensate for the carbon emissions from your own lifestyle, you pay to have an equivalent amount of carbon reduced from another location, or to at least have enough trees planted to absorb the carbon your pricey German sports machine has emitted.

Porsche has a number of options (German car makers love options) in this regard. €49 paid will help to fund the vast Za Hung Hydropower plant in Vietnam while €68 pays for support for the Aura Solar I project in Mexico, a massive solar energy farm that’s helping to kick-start Mexico’s move to low-carbon energy. Upgrade that by €10 and you can help to preserve forests in Zimbabwe. Or for the ultimate, spend €115 and that will help protect trees on Afognak Island in Alaska.

Porsche, sensitive to accusations of ‘greenwashing’ (always a criticism levelled at carbon offset projects) says that it has had each project independently certified by South Pole, a “Swiss-based provider of carbon offsetting projects and sustainability financing that has been active internationally for more than a decade.” Porsche Cars North America president and chief executive Klaus Zellmer said “offering an option for greater sustainability is part of creating a superb Porsche experience.”

Of course, Porsche is also about to launch its Taycan all-electric super saloon, which might help a bit on the climate front, and the German sports car firm also says that it has made major progress with reducing Co2 from its factories. Porsche says that it has just installed two new biogas-fuelled ‘cogeneration’ systems at its headquarters factory in Zuffenhausen, near Stuttgart.

These generate both heat (used to keep the place warm in the winter, as well as fast-drying paintwork on new car bodies) and electricity from carbon-neutral sources, and can even feed excess power generated into the Stuttgart grid. The new generators are reckoned to be 83 per cent efficient (meaning that there’s very little potential energy from their bio-fuel lost to waste heat or friction losses). Porsche already has two natural-gas fuelled power stations at Zuffenhausen, which it says will also switch to bio-gas once the city of Stuttgart starts up its bio-gas supply next year.

“We at Porsche are aware of our responsibility in terms of environmental and climate protection,” explains Albrecht Reimold, member of the executive board for production and logistics at Porsche. “We are continuously optimising our vehicles to make them even more environmentally friendly. In addition, a large number of both large and small initiatives at Porsche result in an overall concept that allows all areas of the company to improve their ecological sustainability step-by-step.”