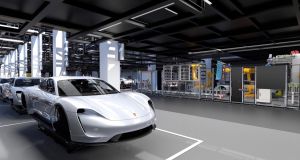 Porsche now expects to build around 40,000 Taycans in 2020, the first full year of production. That’s more than double the original estimate.

Porsche is, yet again, ramping up production capacity of its new Taycan electric car ahead of its official reveal at the upcoming Frankfurt motor show.

Even before production has begun, Porsche has more than doubled its sales expectations for the Taycan. Stuttgart now expects to build around 40,000 Taycans in 2020, the first full year of production. That’s more than double the original estimate, and more than the 36,000 911 sports cars that Porsche sold last year (although, in fairness, the 911 was on a run-out as the 992-edition model didn’t arrive on forecourts until early 2019). Porsche says that it currently has 30,000 solid orders for the car.

Although the Taycan will not be fully revealed as a production model until the Frankfurt motor show this September, Porsche is already taking refundable €2,500 deposits to secure a place in the sales queue, and it’s already ramping up production capacity at its flagship factory in Zuffenhausen, near Stuttgart. The Taycan will be built on a dedicated production line within Zuffenhausen and it can be built more efficiently and more speedily within a given factory space than a conventional Porsche. That’s because of the relative simplicity of its assembly. Electric car propulsion systems are inherently less complex to built (if not to develop) than internal combustion engines.

Porsche has already invested around €6 billion in electric car development, and around €1-billion in the Taycan alone. 1,200 new employees have been hired to help develop and build the new electric car.

Ray Rawlings, dealer principal of the recently-opened Porsche Centre in Dublin (part of the Joe Duffy Group) told The Irish Times that: “We are very excited about the launch of the Taycan as it will be able to accelerate from 0 to 100 km/h in considerably less than 3.5 seconds. It will have a range of more than 500km [measured ont he old NEDC test - ed]. Moreover, it will be possible to add sufficient charge for a range of 100km in just four minutes. Across Europe Porsche has over 20,000 enquiries, so customer interest is growing in anticipation of its arrival.”

Given that Zuffenhausen has a production ceiling of 40,000 it seems likely that Porsche will have to expand the Taycan’s production, and that of its eventual crossover SUV sibling, out to other factories. Porsche’s own production facility at Leipzig is a likely bet, but it’s possible too that Porsche could get Audi to build Taycans at its factory in Brussels. The Brussels plant already builds the e-Tron quattro electric SUV, and is due to start production on the e-Tron GT, effectively a Taycan with an Audi body. Sharing production of the two models could also help both companies reduce costs and overheads.

Porsche is also looking to revolutionise the charging of electric cars with the Taycan. Working with the ‘Fast Charge’ consortium, Porsche has installed a new experimental ultra-fast charger installed on the A8 Autobahn in Germany. It is able to charge the best new EV batteries at a rate of 100km in just three minutes.

The ‘Fast Charge’ group, partially funded by a grant of €7.8 million from the German Federal Transport Ministry, counts BMW, Porsche, and Siemens among its collaborators, and the whole point is to develop technology that reduces the charging time needed for electric vehicles.

To do that, Fast Charge has taken the classical route of adding more power. A lot more power. The best fast charging points in Ireland currently run at 50kW. This new point in Germany pumps 450kW, but does it through the current, familiar, Combined Charging System (CCS) plug.

The results are profound. Porsche hooked up a prototype Taycan, and found that its 90kWh battery could take on sufficient charge for an extra 100km in just three minutes. That’s because the Taycan uses a latest generation 400-volt battery charging system, which requires a special battery cooling setup so that the temperature of the cells can be kept even while the charge is being taken on. The Taycan is expected to be the first 400-volt compatible passenger car when it goes on sale.

If such systems can be developed, it could revive the idea of a ‘filling’ station for electric cars, one which would allow for ultra-rapid charging at large hubs, rather than installing smaller, lower-capacity chargers on a broader geographic basis.

Such as system has been suggested as being viable to The Irish Times by the ESB, which envisages such charging stations using a local megawatt transformer to distribute power to multiple ultra-fast chargers in one location. The investment needed for such a site is reckoned to be similar to that needed to build and equip a new, conventional, filling station.