Estate version of the 3 Series sells strongly, and that could accelerate as higher Co2 taxes start to hit SUVs 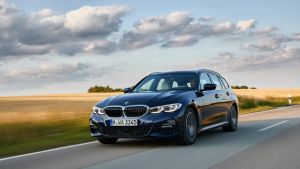 Delightful: the BMW 3 Series Touring is a pleasure to drive and the steering is the best you’ll find in any car this side of your local Porsche garage – it bursts with feel and feedback

Well done, buyers of the BMW 3 Series. I mean it, I’m not trying to be funny. You see, in 2018, out of all people who bought a BMW 3 Series, 25 per cent of them bought the Touring estate model. Now, that’s well behind our European cousins. In Germany, fully two-thirds of 3 Series buyers go for the estate, but it’s about in line with the UK, so that’s okay then. More importantly, it means that the BMW 3 Series buyer is significantly more intelligent than the average Irish car buyer.

How do I figure that? Well, look at the stats – in the car market as a whole, only 7 per cent of buyers go for estates. As compared with the more than 45 per cent who bought an SUV. Can one directly correlate the purchase of an estate car with higher intelligence? Well, one can when the estate gives you at least as much, frequently more interior space and practicality, combined with superior aerodynamics and (usually) lower weight which means better fuel economy, and driving dynamics which are vastly superior.

Then there’s the price tag issue. The new-shape 330d xDrive Touring that we’re testing here, in M-Sport spec, will set you back €63,360 at the kerb. To get the similarly-sized X3 SUV in the same spec means spending €73,410. More than €10,000 extra; your first-born’s college fund, and for what? To sit three inches higher off the ground?

The new 3 Series Touring basically takes over where the last one left off. It’s the truly sensible version of the 3 Series, adding an extra five-litres of loadspace under the luggage cover for a total of 500 litres, and a grand total of 1,510 litres if you fold the back seats flat.

There are some nice, practical, touches including standard electric power for the rear door, and a space under the floor to store the luggage cover when you need to use all of the available space. Plus – and this is truly a 3 Series Touring tradition – you can open the rear tailgate glass separately. This is a small thing, and one that in truth has only limited usefulness, but it makes you feel cooler, so that’s worth the price of admission alone. It’s also 20mm wider than the opening glass of the old model, so it is actually a little more useful.

Style-wise, it’s a slightly mixed bag. It looks less messy than the saloon, and less Lexus-esque around the rear (which is good) but the styling at the front is still a bit heavy-handed, and the kick-up in the rear pillar looks too close to that essayed by the hugely handsome Volvo V60 for comfort.

Underneath, the Touring is basically mechanically identical to the saloon 3 Series that we already know, have already driven, and already love (there are some minor suspension changes to allow for the Touring’s slightly higher weight). The CLAR platform is shared with the 5 Series and 7 Series, and the Touring gets the same version of BMW’s new suspension dampers as the saloon, which have Citroen-style hydraulic bump stops to improve the ride quality over truly awful surfaces.

There’s a longer wheelbase than that of the old Touring model, too. It’s 41mm longer, so that’s good for rear seat space (which is more adequate than it is out-and-out spacious) but also good for dynamics. BMW has unleashed the full witchcraft abilities of its chassis and steering departments on the 3 Series, and it shows. Most BMW engineers will tell you that they prefer to work on a 3 Series than any other car in the range, because it has the right combination of size, performance, weight and mass location.

The steering is the best you’ll find in any car this side of your local Porsche garage – it bursts with feel and feedback, and yet in Comfort mode it’s still light and easy on the wrists. With xDrive four-wheel drive, the 3 Touring feels utterly painted on to the road, certainly in the dry, and yet there’s still a sense of involvement and enjoyment. The driver feels part of the process, not a mere participant, and that alone brings joy to our road-tester hearts.

Okay, so this one’s a diesel, but if the option of buying an oil-burning engine is soon to be taken away from us (and, realistically, it probably is) then this is a heck of a way to go out. BMW’s inline-six 30d engine has for decades been at or near the top of the class for diesel power, and there’s no change here. How else would you combine 265hp, 580Nm of torque, a hot-hatch-beating 0-100km/h time, and 50mpg fuel economy? Oh, and silky-smooth refinement. Diesel engines have been beaten with the evil stick for some time now, often by people who ought to know better, but this powerplant proves that they can still entice, engage, and entertain. We’ll miss them when they’re gone, even if our lungs might thank us.

Still, some succour is in the offing, as BMW is going to offer the new 3 Touring in 330e plugin hybrid guise, starting next summer. With 292hp and Co2 emissions as low as 31g/km, that could potentially ease the pain of diesel disunion.

Will more of us buy a Touring this time around? We might well do – BMW’s product people are suggesting, quietly, that the introduction of full WLTP emissions tests could put a big dent in SUV sales, which could potentially send people back to estates when they’re looking for something practical. If nothing else, a Touring will get you into MENSA quicker than an SUV.

Róisín Ingle: Taylor Swift has guided me through the past decade
8

A cardiac problem that could strike at any time
10