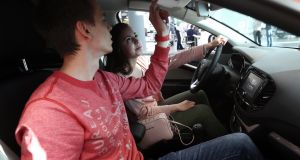 New car sales fell 8.4 per cent in July, with the majority of buyers opting for petrol over diesel, a trend not seen since motor tax changed to an emissions-based regime in 2008.

Diesel held its lead over petrol in terms of sales for the total year, but it has fallen below 50 per cent, to 46.3 per cent, with petrol sales accounting for 41.2 per cent. Hybrids make up 8.9 per cent, with 9,383 registrations, while the sales of fully-electric cars so far this year reached 2,689, representing 2.55 per cent of new car sales.

New data on the market breakdown show private customer sales account for 62,333 registrations, with 18,267 going to the hire-drive market, 13,695 registered by the motor trade itself and 10,376 to either leasing companies or company fleets.

With talk of a hard Brexit weakening sterling’s value against the euro, used imports continue to overshadow the Irish car market. Volkswagen was the most popular brand for buyers shopping outside the Republic, accounting for 7,286 used imports, ahead of Ford with 6,746 and Audi with 5,833.

Amid concerns that the growth of older more polluting used imports will push up Ireland’s average emissions levels, diesel makes up 72 per cent of the used cars re-registered here. The average age of imports is three years.