Sign of the Times: The economy, social attitudes and technology have changed utterly 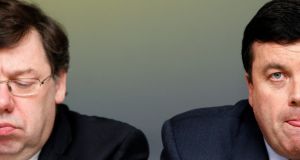 Taoiseach Brian Cowen and Minister for Finance Brian Lenihan at Budget 2009. Many people in rural Ireland feel they have yet to feel the benefits of the recovery. Photograph: Cathal McNaughton/Reuters

The results of the 2019 Sign of the Times survey by Behaviour & Attitudes are published by The Irish Times today. The annual snapshot of Irish life combines quantitative and digital qualitative techniques with B&A published data on the economy, health, technology and shopping. The research was conducted in January and February 2019.

Since its inception in 1985, Behaviour & Attitudes (B&A) has been researching the behaviour and attitudes of Irish people, with a particular emphasis on understanding and interpreting our findings from an economic, social and psychological perspective.

For the past 10 years, we have been conducting a structured annual Sign of the Times study, which has typically incorporated a mix of quantitative and qualitative research techniques. Looking back over our historical studies, a number of trends stand out as particularly relevant in helping us understand the Ireland we live in today.

From an economic perspective, we have seen consumer confidence in the Irish economy recover from a net negative score of -68 per cent in 2009, to +24 per cent by the end of 2018. By January of this year, however, consumer confidence had dropped back significantly to just +2 per cent.

In plain English, this means that 26 per cent of Irish adults believe the country’s economy will be better off in a year’s time, 24 per cent feel it will be worse off, and the difference between the better off and worse off percentages giving us our +2 per cent rating.

This 2019 drop in confidence is undoubtedly linked to concerns over Brexit and broader global economic threats, and if consumer confidence remains this low for a sustained period of time, it will inevitably curtail consumer spending, and ultimately affect the country’s overall economic performance in 2020 and beyond.

Our research also reveals a significant difference in the economic outlook of urban versus rural Ireland, and this has been a consistent trend since the economic recovery began to manifest itself in 2014/2015.

By way of illustration, confidence in the economy stood at +11 per cent in Dublin in January of this year, but was significantly lower, at -1 per cent, in all areas outside Dublin. In our qualitative focus groups, rural dwellers confirm this dynamic, and point to what they believe to be a disproportionate allocation of funding and resources to Dublin and other cities, to the detriment of the economic and social fabric of rural Ireland.

Our second broad theme relates to Ireland’s views on social issues. There is no doubt that there has been a seismic shift in the country’s social and moral mores in a very short period of time. Our ongoing qualitative research suggests that this dynamic has been propagated by people’s exposure to new ideas and perspectives through an ever-broadening array of media channels and travel experiences, coupled with a questioning of the moral authority of the Catholic Church.

This “new Ireland” is best exemplified by way of the ever-widening margins of victory in a series of referendums, culminating in the marriage equality and Eighth Amendment plebiscites in 2015 and 2018.

42% of people feel that the MeToo movement against sexual harassment and assault has gone too far, including 38% of all Irish women

The results of this year’s Sign of the Times study suggest, however, that not all are entirely comfortable with this new Ireland of openness and tolerance. For example, 61 per cent of respondents in this year’s survey tell us that they feel everything in Ireland is “changing too quickly”.

Almost seven in 10 believe that Irish society has become too politically correct, and almost half (47 per cent) express the view that Ireland is losing its sense of identity through an influx of foreign nationals.

Meanwhile, 42 per cent feel that the MeToo movement against sexual harassment and assault has gone too far, including 38 per cent of all Irish women.

There is a danger that these underlying concerns could be exploited by some politicians in forthcoming elections, embroiling Ireland in the wave of nativism sweeping the globe.

The third area within which considerable survey differences appear over the years is, unsurprisingly, that of technology, and the increasing role it plays in our everyday lives.

For example, in August 2014, just 14 per cent of all Irish adults lived in a household with a smart TV set. By February of this year, this figure had increased to more than half of all homes.

Meanwhile, almost 90 per cent of all Irish people with a mobile phone own a smartphone, a figure that has increased significantly even among the over-65s, from 44 per cent smartphone ownership last year to 54 per cent in 2019. Thirteen per cent of us – almost half a million people – now own a wearable digital device.

Our research consistently confirms the benefits to us of this brave new digital world. For example, four in 10 Irish adults report downloading or streaming movies online, two-thirds of us watch YouTube, 38 per cent use Skype, and 64 per cent use instant messaging services such as WhatsApp and Messenger.

Notwithstanding all of these benefits, our 2018 and 2019 Sign of the Times studies confirm that Irish people are beginning to question the power that technology holds over their lives, and the detrimental effect this can have on their physical and psychological wellbeing.

For example, a third of all Irish adults report that social media is a source of anxiety and stress, with one in seven of those using the medium agreeing that scrolling through social media affects their confidence in a negative way.

It is also clear that many are sceptical of the veracity of digital content consumed online, and the research reveals that concern about identity theft is contributing to a sense of caution around online behaviour, especially for millennials and generation Z. It is for these reasons that three-quarters of the population confirm that they are sceptical about what they read online, half are concerned about data privacy online, and just under half say they have tried to reduce their online social media activity.

At a practical level, it is clear that people are attempting to curtail their digital behaviour in an attempt to wrestle back control.

For example, in our 2017 study, 60 per cent of all Irish adults with online access reported checking emails, text messages or social media last thing at night or first thing in the morning. By February of this year, this figure had dropped significantly to just 46 per cent.

In summary, it is clear that the Ireland of 2019 is markedly different to the one B&A began to track via our Sign of the Times survey 10 years ago. While most of these changes have been for the better, when we scratch the surface we can see that many tensions and divisions exist across society.

We have gone through economic boom, bust and recovery, yet large tranches of the country report they have yet to see the benefits of the up-turn.

The moral fabric of the country has been transformed beyond recognition, yet many find this transformation unsettling.

And while Ireland has embraced the benefits of the digital world, we are beginning to change the way we behave to ensure that technology and social media works for us, and not the other way around.