Developer flips Sandymount home – minus most of its garden 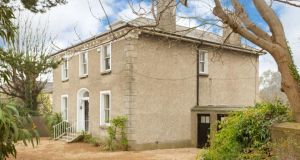 Knight Frank has set a date of Thursday, May 23rd, for the auction of a fine detached house on Park Avenue in Sandymount that last changed hands a year ago, in an off-market deal said to have been worth more than €6 million. This Dublin 4 house is much as it was this time around, but it has lost most of its 1.4 acre garden in the meantime.

The property, at 11 Park Avenue, on the corner of Gilford Road, was registered as sold last May for €4.1 million, but this is likely to represent the amount paid for the house itself and a portion of its site, with an additional €2 million-plus understood to have been paid for the remainder of its grounds. It was bought by the property developer Richmond Homes, which promptly applied for planning permission to build an enclave of houses in the back garden.

Now the house is being sold on, with a new boundary wall screening it from the development site. Peter Kenny, the selling agent, has announced a reserve of €2.25 million. The house retains its original gates on Park Avenue, as well as a garage and a substantial red-brick outhouse that was once, apparently, used as a schoolroom.

The Victorian home, which was once known as Kingsland and was used to accommodate British army officers in the early years of the 20th century, is now in need of considerable refurbishment. Carpets have been stripped away and walls given a fresh coat of paint so viewers will have a better idea of what they are getting.

The layout includes three reception rooms and a family room on the ground floor and four spacious bedrooms and a single room upstairs, all of which share a single bathroom.

Richmond Homes is an offshoot of Avestus Capital Partners, which is headed by alumni of Quinlan Private, the financier Derek Quinlan’s former company. It has acquired several D4 properties in the past 18 months, including a 0.4ha (1ac) site in Donnybrook, at the junction of Eglinton Road and Donnybrook Road, and the St Mary’s nursing-home site on Pembroke Park in Ballsbridge, which it bought last February for more than €6 million.

Last year the company was reported to have raised €200 million of fresh capital, which, in addition to its existing capital, will be used to build about 5,000 homes around Ireland.