How Irish teenagers were viewed in the past: ‘give the kids a chance’ 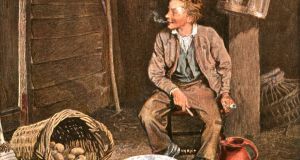 A print from 1900 shows a youth smoking a pipe as he peels potatoes. Photgraph: The Print Collector/Getty Images

Even before the word teenager was in common usage, instructions on how to understand and manage adolescents proved a topic of interest to many Irish readers.

In 1931 one Irish Times health correspondent discussed a letter from a “heartbroken” mother, whose 15- and 16-year-old sons were smoking.

“Sore throats, weak hearts and trembling hands are but a few of the evils that follow excessive smoking,” the correspondent wrote. “I suggest that this troubled mother has a straight talk with the boys. Tell them of our healthy athletes who regard smoking and drinking as the biggest enemies of their wonderful physique.

“In health’s name ask them to refrain from smoking until they are at least 18, and then if they must smoke, let it be in moderation. But above all, my dear lady, do not go eating your heart out in silence. Your boys may burn down the house while you are weeping over their follies, and that reminds me, I hope there is a portable extinguisher in your home.”

Another health column that same year addressed the issue of unruly behaviour, laying the fault firmly at the parents’ feet.

“It may be a good plan to send the refractory child away for a short time. He may be quite happy at the seaside camp and earn golden opinions from his comrades.

“Possibly the boy at home is being too much repressed, sat upon, rebuked and generally squashed. Perhaps he is having too much religion rammed down his reluctant throat. He may know that his parents have destined him to a life in an office when his whole soul is longing for a life at sea or in the air force. He may be shattered and bewildered by the shameful bickerings and eternal squabbles between his father and mother.”

In the year after the second World War ended, contributor Frances Stephens wrote an article titled “‘Teenagers’ fight for freedom”.

Their “greatest need is for privacy, but they rarely get it unless they fight for it”, she wrote.

“They ought to have a room of their own, where they can bring their friends . . . and they ought not to be questioned about their letters. Young people of all kinds and classes need freedom; they need it to grow and expand in. If they are not given it fairly . . . they will take it, even if it means scheming and lying for it . . . Being implacably strict with youngsters will fill their hearts with resentment and spoil all family relationships.”

“The burning question, is,” she concluded, “how late may young people stay out at night? Surely this is a question that best can be settled by mutual arrangement and trust. Most mothers of ‘teenagers’ ought to be young enough to remember how impromptu parties, or ‘do come for a cup of tea after the show’, were spoiled for them by the thought of the parental wrath to come if they should overstay the time limit!”

In 1947, a health correspondent explained “why the teenager is so touchy”.

“This is a reflection of the physical changes that are taking place. It is just a passing phase. And wise parents let it pass unnoticed.”

The first three teenage years were described as the time “when boys and girls need to live their own life, and to be left alone to work things out for themselves . . . they are no longer children to be over-fussed or ordered about”.

Teenage girls should not be teased about their “puppy fat” or boys about their “breaking voice”, warned our writer. “They may start the girl off on a rigorous reducing diet just at a time where her body needs all the food it can get. Or they may set her brooding on her plumpness, wondering if it is going to lose her the chance of marriage.

“As for the teenage boy, teasing may saddle him with a feeling of self-conscious embarrassment in company, may drive him into boorishness and roughness as defence.

“On the physical side, the teenage girl is liable to certain complaints. Backache, general lassitude and discomfort during the monthly periods are the commonest of these . . .

“Learning to stand properly helps to reduce the strain on the back muscles which causes them to ache. Adequate rest is very important at this time when physical growth is rapid. Bed by nine o’clock should be the aim of girls of 16 and under.

“The average healthy boy in his teens will be full of energy . . . He will want an outlet for that energy in work, games or group activity. If he does not get it it may force its way out in aggressiveness or antisocial acts.”

Another article the same year instructed teenagers that “privileges have to be earned”.

“A teenager who behaves irresponsibly shows that he or she is still a child that cannot do without that control and guidance which is so resented. Far too many teenagers do not realise this. They want to be considered as grown-ups, but they also want to behave with the complete irresponsibility of childhood,” it stated.

The “poison” of comics and the impact of rock’n’roll and movies on young minds were regular topics. In 1952 professor of criminology Armand Mergen told an international conference that cowboy films usually had a high moral principle and were fit for youth audiences, having “an actual psychotherapeutic effect on the mind”. The love story in films had more qualified approval from Prof Mergen, according to a report in The Irish Times: “Films telling of love affairs are not dangerous for teenagers if they describe love under its normal aspects.”

Photographs published in 1957 showed the arrest of Norwegian teddy-boys following “the showing of a rock’n’roll film”. Underneath, journalist Sheila Greene asked parents to “remember the American priest who said: ‘There are no delinquent children, only delinquent parents.’ And if you have an unruly youth or a bobby-soxer who thinks Elvis Presley is ‘the most’ in your family examine your own conscience. Did you instil the rudimentary principles of cleanliness, courtesy and punctuality into your children from the cradle on?”

Ms Greene – a former school housekeeper and the mother of a teenager – advised readers: “If they want to use awful American slang, if they rock-and-roll, if they’re crazy about film stars, let them! It’s as good a way as any of working off superfluous energy . . .

“Give the kids a chance, say I. If anything, they’re more courageous, healthier in mind and body than we were ourselves in our young days. Modern teenagers are all right.”