Doireann Garrihy: 'I know people who have barely been outside Dublin'

Broadcaster’s new podcast, The Laughs of Your Life, has topped the charts since March 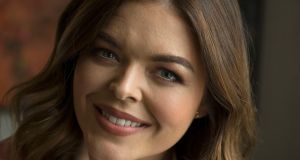 Doireann Garrihy: her ambition is to host a magazine-style show on national radio. Photograph: Dave Meehan 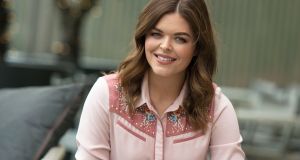 On November 9th, 2016, people all over the world were trying to come to terms with a new reality in which Donald Trump was leader of the free world. That same evening, Doireann Garrihy uploaded a video to Facebook of herself doing dead-on impressions of Irish influencers like Pippa O’Connor, James Kavanagh and Marissa Carter. With people seeking a momentary escape from the stream of despair, it quickly went viral.

“Timing was everything,” she recalls. “Everyone was online that day, everyone was looking at their phones. Everyone saw it and everyone needed a laugh.”

At the time, Garrihy was plugging away as an entertainment reporter in Spin 1038. The success of the video was a turning point.

Some 2½ years later, the 26-year-old has become a familiar fixture on radio and television. She has written and starred in her own comedy series for RTÉ Player. With 179,000 followers, she is one of the country’s most popular people on Instagram.

Her new podcast, The Laughs of Your Life, has consistently topped the charts since she released it in March. She somehow finds the time to teach speech and drama to children, too. It sounds exhausting. “I am very lucky that I have always been a great sleeper,” she says.

In our family, the busier you are is a badge of honour

Reared in Castleknock in Dublin, Garrihy comes from a long line of “goers and doers”, and is the youngest of three girls. Her parents run the ferry companies Dublin Bay Cruises and Doolin2Aran. Her eldest sister Aoibhín is an actor and the brains behind wellness event Beo, while Ailbhe works for the family business. “In our family, the busier you are is a badge of honour,” she says.

Growing up, Garrihy gravitated towards performance, studying drama and theatre at Trinity College. After graduation, she pursued acting. After six months of auditioning, she decided it wasn’t for her.

“I didn’t have a thick enough skin for the rejection, but I also just didn’t have the patience,” she says.

Her sister Aoibhín suggested she sign up to the Today FM School of Radio, a 10-week diploma course in radio production. Despite having Ian Dempsey as her godfather, she had never had an inclination towards broadcasting. But she soon landed gigs with AA Roadwatch and Spin 1038.

“With the rejection in acting, you don’t just start to go, maybe I don’t have talent. You start to go, am I too fat? Should I be a size six or eight to get the parts? Am I too ugly for leading roles? With radio, it doesn’t matter what I look like. I can just sit in front of a microphone, do my own thing, and have the craic.”

Between 2017 and 2018, she co-hosted The Zoo Crew on Spin 1038, but stepped back from it late last year after her work schedule became unsustainable.

At one point, she was rising at 6am to film The Doireann Project, her comedy series for RTÉ Player, and working until 10pm on The Zoo Crew. “I was getting absolutely wrecked and I wasn’t myself. I felt a bit burned out.”

It was a risky move. After all, there is very little movement in radio, and no guarantees of another gig. But so far, it appears to have paid off. Garrihy has landed several stand-in gigs with Today FM, and her ambition is to host a magazine-style show on national radio.

The Laughs of Your Life podcast sees Garrihy chat with well-known Irish personalities about their lives through the prism of laughter. Guests have included Ian Dempsey, Síle Seoige and Stefanie Preissner. They are asked questions like when is a time you got the last laugh. Garrihy was inspired by Desert Island Discs and how it uses music to trigger guests to tell different stories. “I wanted it to have more depth,” she says. “There is light and shade.”

The podcast has been an enormous success so far – a testament to Garrihy’s popularity and the willingness of her fan base to follow her wherever she goes. Part of her appeal hinges on her relatability. Both her parents hail from Co Clare and she believes that her strong ties to the county have afforded her some perspective.

“I know people who have barely been outside Dublin,” she says. “Their idea of ‘outside Dublin’ is Monart. Their idea of a green Ireland is out the back window of The Europe spa. They don’t actually know how people live their lives or what it might feel like to live in a town of 200 in the midlands. People say the boom is back. It’s not back for the majority of the country.”

She is careful not to overdo it with the aspirational posts on social media.

“My dad will say, remember Doireann, there are people who watch you who get up at six in the morning, get their kids out of bed, drop them to a creche, drive to Dublin for two hours, do their job, come home, barely get to have the craic with their kids. That’s their life, Monday to Friday.”

Garrihy has already had quite a career for a 26-year-old, but she isn’t resting on her laurels.

“[Fellow broadcaster Eoghan McDermott] said, ‘For someone of your age, you have pretty much achieved as much as anyone in media would want to achieve,’” she says. “That’s deadly to hear. I’m not finished. I want to keep going. But it’s nice to hear.”

Guiding young Irish women, who lack representation in Stem fields, all the way to world finals
3

‘Once you are not lily-white or freckle-skinned, you are labelled as non-Irish’
9