You might not be a TV star, but your home could be

Consolations of a Property Investor: I’m now dreaming that some of my properties might develop TV careers of their own 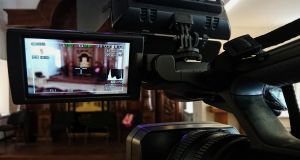 The practicalities of filming make homes with “thru lounges” ideal for on-location shoots, allowing the crew to occupy one half while the actors weave their magic in the other.

Like many young people, in the first blush of youth I vaguely imagined that one day I might make it big on the small screen. Tragically – apart from a ritual humiliation two years ago on the BBC quiz show Eggheads – I’m still waiting for my big TV break. Yet I’m now dreaming that some of my properties might develop TV careers of their own.

A little while ago, a scout for the BBC drama series Peaky Blinders looked around my office in the UK with a view to filming some scenes there. As my office building dates back to the 1850s, and is teeming with period features, it would seem suitable for any number of late-Victorian and early-20th century period dramas.

I considered the inconvenience of clearing sections of my office and seeing a film crew clatter in and out for several days, but weighing these bothers up against the possibility of watching the fabulous Cillian Murphy doing his stylised smoking routine in an armchair next to where I sit every day, seemed a small price to pay.

Alas, it was not to be. Although the scout loved the look of the space, it turned out that, in this particular case, they were looking for something altogether grungier and grimmer for the scene they were planning on filming.

It’s been the second near-miss for this property – a few years ago, there was an inquiry from the production team of the documentary series The Secret History of Our Streets expressing an interest in casting the house for the show. I looked forward to being a talking head on screen, rabbiting on about the house’s blue plaque and its 170-year history.

But, regrettably, nothing concrete ever materialised on that either. Yet, while my projected “big star” house has yet to grab a break, ironically some of my more insignificant-looking houses have lit up the screen. A slightly chintzy three-bed semi I used to live in before renting it out featured a few years back in an ITV thriller in which a fugitive protagonist played by John Simm comes for a crucial meeting with someone who has crucial information about the dastardly crime for which he is being framed.

It’s often said that some of the actors and presenters who succeed in both films and television are the most insignificant-looking people in real life, but somehow – in the manner of Gary Cooper and Henry Fonda – “come alive” in unexpected ways when the camera is placed close upon them.

I’ve discovered this is also true of properties. Looking on screen at John Simm walk up the drive of my old home, stand in the porch and sit down in my old lounge, I found the house barely recognisable – it all oozed a quiet sense of menace, whereas in real life it’s light, bright and endearingly twee. Clearly this house has acting credentials I never recognised.

The practicalities of filming – setting up cameras with lighting people and sound recordists – seem to mean that homes with “thru lounges” (like my old home) are particularly favoured for on-location shoots, allowing the crew to occupy one half of an expansive room while the actors weave their magic in the other half.

As this filming was conducted in a tenanted house, the co-operation of the tenants is of course essential – in this particular case, it was the tenants themselves who had volunteered themselves to the film crew in response to a leaflet drop seeking filming locations. As a consequence, I never actually got to see filming in progress though merely noticed a great cluster of crew and equipment as I passed by.

But a few days later, a payment for a few hundred euro for allowing the property to be used was duly deposited in my bank account. Hmm, this is the type of business I like the sound of . . .

More advanced-level location shooting apparently requires that the property be completely redecorated and furnished by the film crew, and then turned back again at the end. Having your home get a complete makeover by a film crew sounds like it could be a wonderful perk – though I am sure there are also horror stories where it all goes horribly wrong.

I’m still in the process of trying to push my shy and reticent properties on to the full glare of the stage. Whether I report back in years to come – in classic jaded Hollywood fashion – that stardom, sob, was never worth all the sacrifices made for it, is something only time will tell.