We bought the bank, and now we live in it

Returning to Co Kildare from Oz, Kevin and Lisa-Maria Duffy bought a bank to live in

Hibernian House, Monasterevin, a Georgian townhouse dating back to 1850 - 1870 which was once home to the Hibernian Bank, has been restored to its former glory by a young family who have recently returned home from Australia. Video: Bryan O'Brien 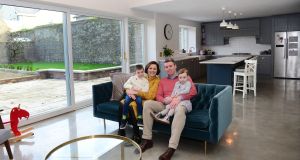 Renovation: ‘It was our Christmas and anniversary present to ourselves.’ Photograph: Bryan O’Brien

An Irish couple, Kevin and Lisa-Marie Duffy, who spent a decade in Sydney, took a punt on a Georgian townhouse – a disused bank in Monasterevin, Co Kildare– and poured their heart and soul into rehabilitating the derelict property. The result is a crisp, sympathetic modernisation that makes this kind of project look easy. The reality was far less clean-cut. It took back-breaking, hands-on work to get the job done.

The property, Hibernian House, was originally a branch of the Hibernian Bank, and was taken over by Bank of Ireland in the late 1950s. It is the second house in a block of seven Georgian townhouses known in Monasterevin as West End. Originally the property hadbeen two houses with the bank turning one of the front doors into a window and enlarging all windows at ground level.

The mid-terrace house had been on the market for about 18 months and was asking 195,000 through agent Conway Auctioneers in Kildare town. While they were home for Christmas, one of the first cold days in January, the savvy couple managed to convince the agent to show it to them and they made a decision there to buy it. “Coming from an extremely hot property market in Sydney we thought it was too good a chance to pass over and thought we could probably sell it on without too much trouble,” Kevin explains. That’s if they decided to stay Down Under.

We wanted to show it as it is, a modern refurbishment


The agent described it as being “in need of considerable renovation and restoration”. Structurally, most of the building was sound. But leaks from holes in the roof had created wet rot. Eighty per cent of the staircases – the two sets of stairs from when the properties were still two buildings – were rotten. There was dry rot, too, and no heating.

As well as restoration they had to do something about the layout. As well as two staircases, the residence had two halls. “Part of the challenge was not to lose the history but to make the layout a bit more practical for family life,” says Kevin.

But much of the original door and window architraves, shutters, hardwood floors, feature fireplaces – six in total – and ceiling plasterwork of the heritage building were in situ. They enlisted Anne Madaire, of AMK Architects in Kildare and made their planning application while still living overseas.

They got some tenders in for building works and decided to go direct, which lead to a saving of about 40 per cent on costs by managing it themselves. Kevin worked in project management and even when they made the decision to move home was still commuting to Australia.

When he moved home he did a lot of the physical labour himself, putting in evenings and Saturdays at Hibernian House while the couple spent their family time on Sundays visiting bathroom, kitchen and paint showrooms.

Kevin and his father first had to declutter the place, repurposing a cast iron bed in a guest room and mirrors in the bathrooms. An old piano, beyond repair, will find a place in the formal dining room. They also found a receipt for net curtains that had been purchased in 1918 in Harrods, London. The curtains themselves were long gone.

Lisa-Marie, who was about to start studying interior design, viewed the project as way of getting valuable and practical first-hand experience and got stuck into picking colours, floors, tiles and all the other decorative elements.

When walls and ceilings were first stripped out Lisa-Marie admits she couldn’t visualise how it would look in the end, but the pair’s talents and strengths complemented each other, because, as she puts it, “we see things differently”. What they were both in agreement on was that they wanted the house to be well-insulated and comfortable to live in, with no draughts.

The house now opens into the hall, still tiled in its original Victorian pattern. The old banking hall, to the right, is now the family’s formal dining room and while most of the floor is polished concrete the original tiled floor of the second hallway has also been retained. The safe, made of reinforced concrete, was demolished. Kevin had hoped to use it as a wine cellar but it was damp and there was no way of dry-lining it to protect it. Its timber and steel reinforced door was salvaged and repurposed as part of a walk-in larder-cum-utility room, which is hidden behind two doors, off the kitchen, supplied by Killenard-based Shiels & Co. The same firm did all the joinery.

Timeless Sash Windows repaired the sash windows to the front while new single pane windows were installed in the rear. “Rather than replicate the Georgian style we wanted to show it as it is, a modern refurbishment,” says Kevin.

His home office is to the left of the front hall. There in underfloor heating throughout, save for the two original halls, one of which leads through to a lofty double-height sitting room that is open plan.

Here, an upholstered sofa from made.com and a pair of Scandi-style armchairs from Ikea have been set around bookcases and shelving. At the far end of this room, which extends the width of the house, is the kitchen. It overlooks the garden, a massive expanse of green that is 50 metres long and has vehicular rear access – all slap bang in the middle of town.

But Kevin is no stranger to the idea of living over a shop. He grew up with it. His mother and father live down the street in a building from which she ran her eponymous salon, Sadie Duffy Hairdressing, until she retired about 10 years ago. Sadie never drove and wanted to be in town close to public transport links. Kevin’s father ran the town’s general stores. “Their set-up is not dissimilar to ours,” he says.

On the hall return is the kid’s bedroom. Hamish (5) and Edith (2) share this room, which is adjacent to the family bathroom. There is a formal sitting room to the front of the first floor. From the dual aspect room you can catch glimpses of the river Barrow to the front, across the gardens on the other side of the road, and a large arched window, supplied by Nordan, looks out to the rear of the building and small courtyard.

The house was originally laid out in a H-formation with two internal courtyards. Their architect retained this one to allow light to wash into the rooms front and back, but filled in the second one to accommodate bathrooms and the aforementioned pantry.

Kevin and Lise-Marie’s bedroom’s is above the living room to the front and spans the width of the property. It includes a walk-in wardrobe and ensuite bathroom.

The building works started in April and the family had moved in on December 20th, the couple’s fifth wedding anniversary. All their hard work has paid off. “It was our Christmas and anniversary present to ourselves,” says Kevin.

Their central location means their eldest can walk to school or nip down the road to see his grandparents, without having to get into the car. And though their garden includes a patio and barbecue area, after a decade of taking outdoor living for granted the couple admit they’re happy to spend a lot more time indoors.

Where does this bile against Meghan Markle come from?
7