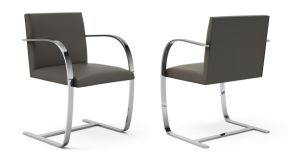 If anything confounds the plumped up cosy idea of a bedroom chair it’s the Brno flat-bar chair, designed by Mies van der Rohe for the main bedroom of the home commissioned in 1929 by wealthy industrialists Fritz and Greta Tugendhat. The three-storey villa in Brno in the Czech Republic, designed by van der Rohe, then deeply involved in the Bauhaus movement, is considered a visionary modernist prototype and is listed by Unesco. Some sources give joint credit for the chair’s design to Lilly Reich, the interior designer on the ambitious project. Now restored, the gleaming concrete, steel and glass villa is open to the public, with booking recommended such is the global interest from architects and designers.

The more common version of the Brno chair is one made with tubular bars for elsewhere in the villa – but there was only one flat-bar version, surely the more elegant option. The cantilevered chair made in polished metal with leather upholstery appears the definition of van der Rohe’s famous working aphorism “less is more”. In 1958, for his design of the Four Seasons restaurant in New York’s Seagram building, Philip Johnson chose the Brno flat bar for the seating and Knoll (which still makes it) made a version with added padding.

Thinking of take-out tonight? Here's the pick of Dublin's restaurant meals to go
10