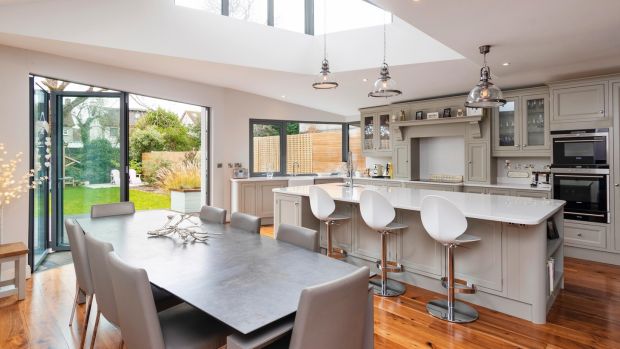 The Simon Community’s annual fundraiser, Open House, sees architects providing short consultations for a nominal sum with homeowners considering renovation works. All proceeds go to the charity, and in a process that is essentially speed dating for homeowners and designers, few professionals expect to then get rewarded with real projects.

But when the owners of number 8 Woodbrook Park, a mid-century semi, situated on a quiet cul-de-sac between busy Ballyroan and Knocklyon roads, consulted with Brian Cobbe of Cobbe Architecture they were so impressed by his suggestions that they signed him up on the spot.

The house opens into a bright hall floored in a fine American walnut engineered timber that covers the entire ground floor. The formal living room is to the front and has an open fire. Pocket sliding doors lead through to the family room, now part of a large open-plan space that fills the rest of the ground level with a hammered black granite fireplace with glass-fronted gas fire at its heart.  The design has what Cobbe describes as a folded zinc roof, that resembles his work on Holy Cross Church in Dundrum in that it has a slightly ecclesiastical feel, especially when viewed from the rear garden. Not a fan of straight lines, his ceiling design is on several different planes with glazing set at angles to the glass back wall.

“It’s all about light,” he says. “While the back is south facing the raised roof glazing pivots light back in what is described as canted geometry,” says the architect.

The property, which is seeking €775,000 through Sherry FitzGerald, now measures 142sq m/1,532sq ft. A grey painted in-frame kitchen runs the width of the rear. It conceals a door into a utility room which has access to the back garden and garage, where there is a further 14.5sq m of space.

The garden, accessed through bi-fold doors, is laid out in lawn and very private.

Upstairs the layout is pretty much as it would have been when the house was first built. There are two good-sized doubles, and a single, all with built-in wardrobes as well as the property’s only bathroom, where there is a separate shower and bath.

There is scope to extend further, subject to planning permission. Last July number 13 sold for €557,500, according to the Property Price Register. It was on the market seeking €569,950. Of the nine houses on the road listed on the register the highest price achieved so far was for number 20, a house where the garage had been converted, which sold in November 2016 for €650,000.

Mario Rosenstock: ‘The miscarriages were some of the worst things I can ever remember’