Leeson Street lady with a facelift (and a parking spot) for €1.385m 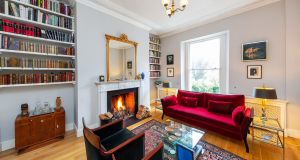 One of the reception rooms 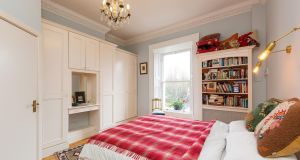 One of the bedrooms

Number 109 Leeson Street Upper is home to Matthew, an American fashion and arts journalist, and  Pascal. They purchased the three-bed terraced Victorian last year for €1.32 million and, due to new work opportunities, are relocating to Hong Kong with their very large but affable Maine Coon cat Raffy.

The property, which extends to 192sq m (2,067sq ft), was given a cosmetic overhaul over the past year, which included repainting the entire house in colours more suited to the period of the property. The main bathroom on the return was also transformed – to include a new shower and trompe l’oeil tiling – which marries well with the charcoal bath surround. New reclaimed flooring was installed on the upper floor, and old carpets were removed and replaced from the stairs and landings.

At hall level lie two reception rooms, both of which have impressive period fireplaces – one has an open fire and the room to the front has a gas insert, which could easily be reinstated to its original form.

At garden level lies a dining room – complete with a stove set in the original hearth – and this in turn leads to the kitchen which in reality is far more spacious than the photograph depicts. From here there is access to the rear garden through patio doors. One of the benefits of the rear garden are the double gates which allow off-street parking for a car – a rarity on this stretch of the street.

A feature worth mentioning is the large arched window overlooking the stairwell, which floods the stairs and upper landing with light.

The property has three bedrooms, the principal overlooks the rear garden and has working shutters and soundproof windows. It has a small en suite, which new owners will want to upgrade.

One of the trade-offs to living in this part of the city is the morning and evening traffic, but the location is second to none for access to schools, restaurants and city centre, with the added bonus that O’Brien’s pub is less than a minute’s stroll.

In its current layout the two secondary bedrooms are set up as offices, from which both Matthew and Pascal work.

New owners may want to change the tiles in the front hallway, and the rear garden has scope for improvement. To the front of the house lies a particularly impressive twisted hazel, which provides a privacy canopy in summer and interest in winter from the corkscrew branches.

The couple have placed their home on the market through Hunters with an asking price of €1.385 million.