Who is responsible for repairing a dangerous boundary wall?

Property Clinic: Wall divides me from my neighbour’s house, in a different housing estate 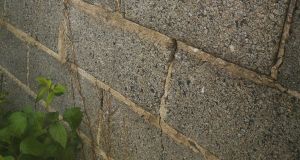 There are cracks running up the middle of the wall in numerous places. Some blocks have fallen off and the whole wall moves when you push it.

The wall is about 20m long and 2m high. And only one block thin. The ground is higher on my side than on my neighbour’s, probably by a third of a metre. There are cracks running up the middle of it in numerous places. Some blocks have fallen off and the whole wall moves when you push it. To sum it all up, it’s poorly built and very close to falling over.

A year ago, the developers of that housing estate recently built another housing estate behind my house. And they built another wall, which is huge. About 4m high. It’s fine, for now. But when they were doing it, my mother knew they were the same people and showed them the side wall bordering my neighbour. We got an engineer in to look at the wall and he said it was a nightmare and not structurally sound at all.

At the time, the developers agreed to rebuild only about 1m of the wall closest to the new housing estate which was being developed, leaving the remaining 19m untouched and dangerous.

My neighbour has a young boy, and he plays football in the garden quite often. We both fear that some day the boy or anyone else for that matter might climb the wall. (Sometimes teenagers enter our garden without our permission and hop over the wall as a shortcut between estates.) The wall will soon fall over, possibly injuring themselves on our property or worse.

With all this information, can you clarify who is responsible for the maintenance of that wall? Is it ours or our neighbours? Do we take joint responsibility? Or is it the developer or the council’s responsibility because the wall bounds two different housing estates?

Any information would be greatly appreciated. We’re very lost as to what to do here. For the safety of everyone, we would look into paying for it ourselves. But in this current environment, and the poor skill that went into building the wall in the first place, we both feel that it shouldn’t be us who pays for it.

The boundary wall, as you describe it, and as indicated by your photographs, is indeed dangerous. You state that your engineer has confirmed that it’s not structurally sound. Immediate action by you and your neighbour is imperative, irrespective of who is responsible or who pays for it.

Property owners have a duty of care under Section 4 of the Occupiers’ Liability Act 1995. Section 4 deals with, “Duty owed to recreational users or trespassers.” Both you and your neighbour are aware of the danger, you both have a duty of care to any person who may enter your property with or without your permission, including the teenagers you refer to.

Your first action should be to put a notice in place warning of the danger and a hazard warning barrier tape alongside the wall, at a distance from it, equivalent to its height if possible. Ask your engineer to design and oversee the placement of temporary support props. These measures are precautionary only, until you can take remedial action.

The implicit acceptance by you and your neighbour of the wall as a boundary wall, combined with the passage of 25 years with no action in the interim, weakens your position

It is understandable that you and your neighbour feel that you both should not have to pay for it, but it is likely that you will be obliged to share the costs involved. The developers are responsible in so far as they did not construct the wall to the required structural standards. However, since no action in relation to this substandard work was taken at the time of construction or shortly afterwards, it makes your task of getting the developer to accept responsibility very difficult.

The apparent absence of a building surveyor or engineer’s report at the time, the implicit acceptance by you and your neighbour of the wall as a boundary wall, combined with the passage of 25 years with no action in the interim, weakens your position.

The fact that you did not choose to have it built at the time may not be relevant as it is likely that the developer replaced a previous physical boundary feature at that location with the wall, and you and your neighbour accepted it as your boundary wall. Furthermore, it is likely to be now considered as a legally shared boundary wall with the legal boundary between your properties located along the centre of the wall, and with shared responsibility for the wall. The council does not have responsibility as it’s on private property.

Your best, and probably only, chance of getting the developers involved is for both of you to meet them, explain the situation and ask them to contribute towards the replacement of the wall by supplying blocks or a block layer. I am not optimistic about the outcome.

If you approach the developer formally by email or letter, the developer may ignore it or get legal advice, and you can predict where the latter potentially leads to. The cost of litigation, the associated stress and the uncertain outcome, is not an attractive option. The factors as set out above, including the lapse of time and apparent acceptance of the wall, would weaken your case in court. Legal advice in advance is likely to confirm this.

Therefore, in summary, act now with your neighbour to put up a warning notice, some form of barrier and/or barrier tape and temporary props. Talk to the developers, and, with or without their assistance, you and your neighbour should proceed, as soon as possible, to replace the wall.

You should also get your engineer involved in the design and supervision. The ground level differential between each side exerts a lateral pressure and needs to be considered in the design. Request your engineer to provide a certification of compliance with the building regulations, on completion of the work.

I should also refer to the 4m high wall the developers constructed a year ago behind your house. It is an extraordinary height for a domestic garden wall and would present considerably higher safety risks and higher remediation costs in the future if not designed and constructed to appropriate standards.

You state that, “it is fine, for now”. You may also have considered the damaged 2m wall to be fine after it was constructed. If the 4m wall is bordering, or close to your property, you should check the planning office file for the development and arrange for your engineer to inspect the wall. You do not want a repeat of your present problem on a considerably larger scale. – Patrick Shine

Patrick Shine is a chartered geomatics surveyor, a chartered civil engineer, and a member of scsi, scsi.ie